Divya Jyoti Jagrati Sansthan under its initiative ‘Aarogya’ organized Blood Donation Camp on 4th October 2015 in Shimla at Ridge Maidan. Lamp lightening session was done by Dr. Mastram Sharma, Secretary of Himachal Pradesh Culture Academy who also marked commendable inauguration of the camp. On this occasion, the chief Guest said that - transferring a pint of blood will be nothing to us, but it may gift life to somebody in need and appreciated the initiative taken by DJJS with an assurance to extend his support for similar activities. He insisted that everybody should realize one’s social responsibility to donate blood. This camp was organized in association with Kamla Nehru State Hospital for Mother and Child, Shimla and its medical team of Dr. Gagan Deep Dhillon, M.O. I/c blood bank along with two lab technicians, two staff nurse and one counselor provided their services. Sadhavi Rukmani Bharti Ji, disciple of His Holiness Ashutosh Maharaj Ji and also the camp coordinator said that - in this camp not only localities but also tourists from other states enthusiastically participated in donating blood. In total, 55 units of blood were collected from more than 45 donors (30 men & 15 women). The most interesting and notable was that, out of these donors, Sh. Mahendra Singh donated for the 24th time, Sh. Khemraj Kaushal for the 17th time and Sh. Pratap Thakur 63rd time in this camp. The donors were also tested for their respective blood groups and were informed later of the same. The donors were given a paper of recognition for the noble cause of blood donation. The blood obtained by this camp will be used to save numerous lives across the city. Refreshments, certificates of appreciation, and blood donation cards were given to the Donors. The event got wide coverage by media. 'Ajit Samachar', 'Amar Ujala' and 'Himachal Dastak' carried the story beautifully. 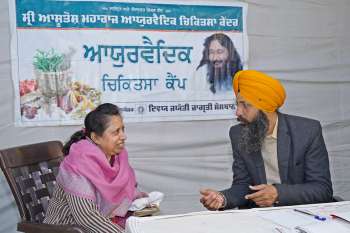