Celebration of Sanskrit Diwas and Raksha Bandhan at Manthan SVKs

India’s rich cultural and traditional diversity is reflected in its festivities. It not only strengthens the bond of love and brotherhood mong each other, but also helps to broaden ones’ vision beyond the borders of one’s own family to the entire earth (vasudha) as one family – Vasudhaiva kutumbakam. To inculcate the this feeling of “Vasudhaiva kutumbakam” among the children, the social initiative of Divya Jyoti Jagrati Sansthan Manthan-SVK, that has been providing holistic education to the under privileged children for many years, celebrated Raksha Bandhan and Sanskrit Diwas together on 25 August 2018 at all its branches. In today’s scenario, such festivals celebrations enrich the knowledge and values of our rich cultural heritage among the children. On the occasion, a “Rakhi making” competition was organised at all branches in which students made beautiful and colourful rakhis through the reusable and locally available materials that also depicted the creative enhancement in the children. The reason behind the competition was to inculcate the feeling of care and affection among the students. Rakhi ceremony was followed by sweets among all. After the celebration, teachers shared mythological stories behind the celebration of festival Rakhi and spoke about its significance. The preachers of DJJS also introduced the students with the concept of Sanskrit Diwas held on the same day. They told the students that even though the Sanskrit is the very first of the ancient languages through which several other languages emerged but still its use in our daily life is extremely limited and is gradually dying. So the main idea of celebrating Sanskrit Diwas is to spread awareness about the importance of Sanskrit- the most scientific and ancient language, amongst the people and to let them know about the rich cultural heritage tradition of Vedic age. In this way, Manthan SVK has tried to familiarise the children with the ancient Bharat. With a pledge to establish Sanskrit as a functional language once again, the program was concluded with a prayer in Sanskrit and the refreshment was served to all. All this has been achieved by the grace and inspiration of His Holiness Ashutosh Maharaj Ji, the head and founder of Divya Jyoti Jagrati sansthan. 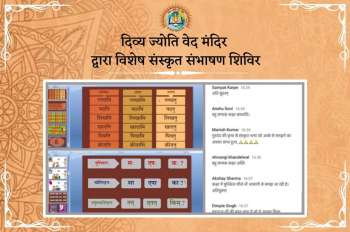