Faith enhancing emotions can uplift the human spirit to great heights. Sometimes what words and actions cannot achieve, positive emotions do. To invoke such emotions, Divya Jyoti Jagrati Sansthan (DJJS), under the benign grace of His Holiness Ashutosh Maharaj Ji, organized a devotional concert at Jaitu (Punjab) on 26th March 2022. The theme of the mesmerizing event was ‘Bhavanjali’ meaning a heartfelt tribute at the lotus feet of universal consciousness personified by the spiritually enlightened perfect master (Guru). The orator of the concert Sadhvi Vaishnavi Bharti Ji lucidly presented energizing wisdom pearls to the present audience. Sadhvi Ji said that today the world is in great need of positivity. Our ancient Indian Sanskrit texts can help us learn a great lesson in this direction. The texts mention numerous life stories of people who with pious demeanor attained salvation when dedicated to a true spiritual master. For example, Mata Shabari was able to feed the human incarnation of Lord Vishnu as Shri Ram in her Guru's Ashram. How was she able to do so? Mata Shabari never questioned her Guru Matanga Rishi's words that with true devotion, even God blesses us with his presence. However, to keep one's demeanor pious consistently requires the divine connection between Guru and the disciple. Mata Shabari, thus, was an enlightened disciple of Guru Matanga. Our ancient Indian civilization has bestowed us with the technique of direct perception of eternal knowledge (Brahm Gyan). When everything in this world cannot bring an emotion of joy, the divine knowledge or Brahm Gyan holds the key to inner equilibrium alone. When this knowledge is bestowed by a true Guru, then the entire life of an individual becomes blissful. With constant practice of this technique, the mind attains calmness even in adverse situations. For instance, it was only when Arjuna received the divine guidance of Shri Krishna on the battlefield of the Kurukshetra that the former was able to win against his relatives.

Sadhvi Ji, bringing the event to a close, made the clarion call that the knowledge Arjuna gained exists even today. The only step we have to take for that is to find a true spiritual teacher, a perfect master who has achieved spiritual heights and can guide the individual on the same. One can search the whole world and rest not until such a Guru is found but if anyone wishes to have direct perception at this moment without any delay, then the doors of DJJS are always open. His Holiness Ashutosh Maharaj Ji is one such true Guru who has created a wave of spiritual transformation across the world through Brahm Gyan. The concert ended with the distribution of food offerings (prasadam). 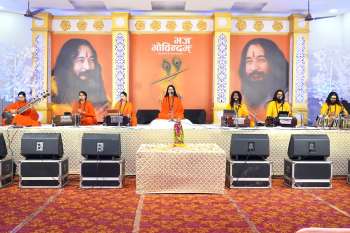 Devotional Concert at Sirsa, Haryana Imbued the Masses with Divinity