Under the ‘Kamdhenu’ project associated with conservation, research and improvement of Indian breed (Sahiwal) of cows, DJJS representatives were invited on July 15 along with Senior Indian scientists by Punjab Chief Minister Sardar Parkash Singh Badal at his residence (Chandigarh) to discuss methods to improve Sahiwal breed cows count in Punjab. The delegation of scientists was led by Dr Satish Kumar (Chief Scientist CCMB, Hyderabad). The main focus during the two hour meeting continued to be methods and techniques to increase Sahiwal cow’s count in Punjab and encouraging scientists to bring new scientific techniques to Punjab. The honourable CM has announced to form a committee of all the scientists present there and this committee will present before the CM after doing thorough study on the subject. Apart from scientists, the meeting was attended by politicians, Breeders and Animal Husbandry officers. The Honorable Governor of Punjab & Haryana Prof Kaptan Singh Solanki also hosted dinner in honor of all cattle lovers and scientists. Full cooperation was promised by Governor in this regard. 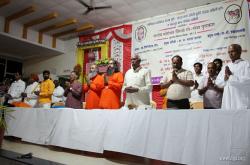