Hindi Diwas was celebrated in all Manthan SVK centers of Delhi- NCR on 14th september 2015. Hindi Diwas, also called Hindi Day is an annual literary-day celebrated on 14 September in Hindi speaking regions of India and other countries where Hindi speaking population is there . It serves to propagate the Hindi language and its cultural heritage and values. Its importance is demonstrated by feasts, events, competitions and other services held on this day. The event also serves as a patriotic reminder to Hindi-speaking populations of their common roots and unity.Hindi is spoken as a native language by 258 million people and is recognized as the 2nd largest language in the world. Hindi Diwas is celebrated on 14 September because on this day in 1949, the Constituent Assembly of India had adopted Hindi written in Devanagari script as the official language of the Republic of India. Manthan SVK held - dictations, hand-writing, poems recitations, extempore, story telling, singing, word making puzzles competitions, self compositions etc. on the day. Students received prizes for bagging First, second and third positions in the events. All other students were also given participation gifts as a token of appreciation. Children enjoyed a lot during the events, thereby enhancing their linguistic, creative and academic skills. 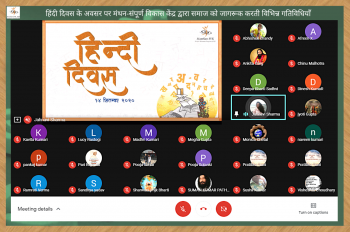