Teachers are the guiding force for the young generation which contributes not only to good education, rather they pass on those values and norms which create a civilized and gender balanced society. Holding this ideology, DJJS Santulan was invited at the 1st female teacher convention conducted by the Mahila Shiksha Sangh to generate awareness and enrich the audience regarding gender equality and women empowerment. Both males and female teacher and audiences were present in the convention held on 12th of December 2021 at Muktakash Munch, Exhibition Ground in Aligarh, Uttar Pradesh to be a part of the empowering forum. The convention started with devotional hymn offered to Goddess Saraswati, followed by an enlightening lecture by DJJS Santulan representative Sadhvi Vedvani Bharti Ji where Sadhvi Ji said –“Teaching is not just a profession; it’s a passion which holds the capacity to transform and evolve the mindsets of the society”. While addressing  the audience on women empowerment, DJJS Sadhvis talked about the ultimate remedy of eradicating gender based injustices and violence through attainment of holistic empowerment as the practice of Brahmagyan Meditation, under the guidance of Divya Guru [Perfect Spiritual Master] Shri Ashutosh Maharaj Ji.

The convention with a brief overview of various social initiatives the organization in the society to achieve its goal of world peace. 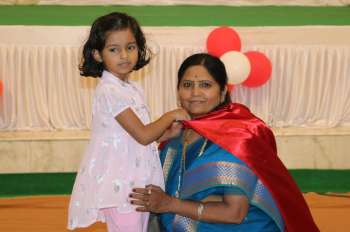