Divya Jyoti Jagrati Sansthan (DJJS) with the support of the High Commission of India, Canberra, Australia and Cr Angela Owen raised curtains on International Day of Yoga for the year 2021, in Brisbane, Australia, through a FREE YOGA SESSION at Calamvale District Park, Brisbane, Queensland, Australia, on June 13, 2021. The initiative was furthered under DJJS Holistic Health Program- Aarogya. Since 2017, DJJS along with the support of Honorable Indian Consulate Mrs. Archana Singh and Cr Angela Owen has been conducting this event in Brisbane, Australia. DJJS is steadfast in its support of the initiative of our Honorable Prime Minister Shri Narender Modi Ji, to take this gem of Indian Cultural Heritage, called Yog (Yoga), to the world. It is a day to acknowledge the depths and breadths of knowledge, study, research, and wisdom of our saints and seers and educate the societies and cultures around the globe about its significance in our lives.

The torrid times humanity is going through in today’s scenarios makes it even more relevant to take this science, of our sages, to every home. Yog, popularly known as Yoga, is a holistic science for health and wellbeing which not only works on your body but transcends to the level of mind and soul while maintaining a complete equilibrium between all three of them.

Hundreds of yoga enthusiasts partook in the event and learned conventional yoga techniques to deal with stress, anxiety, and depression through DJJS's exclusive VILAKSHAN YOG model.

In Australia, DJJS has been actively working for the community at large since more than 8 years now. The organization has been conducting and also participating in various cultural, social, and spiritual events across different cities like Sydney, Canberra, Perth, Brisbane, Melbourne, and Adelaide. To name some of the initiatives – Storytelling sessions based on Ancient Indian Scriptures in the form of Narrative of Lord Rama as “Ramkatha”, “Sunderkand Path”, “Ramcharitmanas Pravachan” in the most rational and scientific temper as foolproof solution for problems of contemporary world; revival of festivals especially Indian ones like “Shri Krishna Janamashtami”, “Shri Ram Navami” bridging the gap between modern day lifesyltes with those of the traditional ones; reconciliation of cultural practices like “Kalash Yatras” which are auspicious processions having womenfolk as key participants, praying for the good of one and all; “Havan Yajnas” the Vedic fire sacrifices along with Vedic hymns, for the benefit of globe at large; various plays, dramatics and dance ballets over issues of social concern et al.

Also, DJJS has been instrumental in bringing Indian Festivities to King George Square, Brisbane, with the commemoration of “Indian New Year” for the first time and showcase of the scientific aspects of ancient Indian Culture including its wisdom of Gurukuls (ancient Indian schools), Art, Music, Dances, Costumes as well as the Kitchen.  For its efficacious initiatives for the community in Australia, DJJS, therefore, has always received munificent support from the State as well as High Commission of India.

Divya Jyoti Jagrati Sansthan (DJJS), established and run under the Mentorship of His HolinessAshutosh Maharaj Ji, is a registered socio-spiritual, not-for-profit organization. To realize the vision – ‘From Self Awakening to Global Peace’ and to transform the torn and tormented humanity into a peaceful “Global Family”. 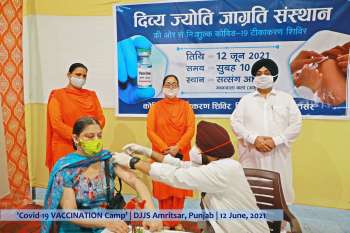