This blossoms with the joyous smiles of innocent kids; this nurtures their innate abilities; this brings out the best in them; this undertakes to make them socially and morally responsible. This is Manthan-Sampoorna Vikas Kendra that fosters the growth and development of under-privileged children of the society. 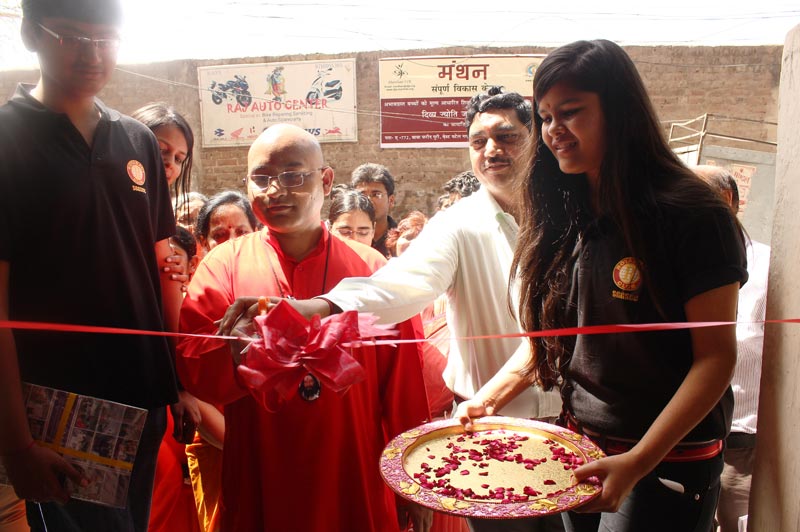 Manthan is the Holistic Education Program of Divya Jyoti Jagrati Sansthan (DJJS), designed under the noble guidance of His Holiness Shri Ashutosh Maharaj Ji, the Founder and Head of DJJS. Manthan successfully runs its 13 other SVKs in Delhi, Punjab, Haryana, and Bihar.

The inaugural ceremony was jam-packed with enthusiastic events throughout. With an auspicious beginning, the students from Divya Jyoti Ved Mandir chanted Ved Mantras, thereby spreading soothing vibes all around. This was followed by the ceremonial lamp lighting by the dignitaries.

Mrs. Purnima Vidyarthi and the guests from Rotaract Club were felicitated by tiny tots, the children from Manthan-SVK

Expressing concern for the under-privileged children of Baba Farid Puri Colony, Mrs. Purnima Vidyarthi, in her address, congratulated the Manthan team and Rotaractors for their great job.

Mr. Ajay Kumar also shared his encouraging words and highly praised the inauguration of the new Manthan SVK, which was also in line with the Total Literacy mission of the Rotaract Club.

A presentation showing the passionate journey of Rotaract Club members was screened. This depicted the fun-filled experience they had while revamping the donated factory outlet and transforming it into a full-fledged operational Manthan SVK, comprising 3 classrooms, bathrooms, and a main hall. A Rotaractor also shared her words about motivation of the Club to join and support the Manthan initiative of DJJS.

Children from Manthan SVK’s Dwarka branch gave a captivating dance performance that was applauded with claps.

Three children (beneficiaries) from Manthan SVKs shared their experiences that reflected their happiness as being a Manthanite. They expressed that Manthan helped them polish their academic skills and also gave them an opportunity to engage in creative activities. Their thankfulness expressed what they felt for Manthan.

A presentation showcasing the journey of association of DJJS and Rotaract Club was also screened. It showed how Rotaractors began with the renovation of the factory outlet and creatively designed it as a school.

Master Vidhu, an active Manthan volunteer, also addressed the audience. He admired the noble work done by Manthan and Rotaractors to help the under-privileged children. Master Vidhu has been invited as the International jury at the Giffoni Film Festival Italy 2014. He also bagged the Best Film Award at Chinh International Kids Film Festival for ‘Cast Resort’, a film on bullying in schools. He is the President of CODE Club (2012-2015).

A video presentation, outlining the aim of Manthan, was also screened.

The program ended with the Vote of Thanks by Sadhvi Deepa Bharti Ji, who acquainted the audience with the mission of DJJS i.e. from Self-transformation to Global Peace. She also highlighted the social initiatives taken by DJJS and said that the only source of inspiration behind them was Shri Ashutosh Maharaj Ji.

Saluting the spirit of Rotaractors, Sadhvi Ji applauded their efforts in the development of a new SVK. She said, “Society changes when its youth take the onus to transform it and if we put in efforts for societal welfare, this society will also return us something good.”

“This world is not deprived of creative minds, but lacks responsible citizens. If we become responsible, we can achieve everything”, added Sadhvi Ji.

Recalling the teachings of Shri Ashutosh Maharaj Ji, she said, “We need to grab all the opportunities and then our country will become Jagatguru, where people will have moral values.”

Sadhvi Ji appealed to the audience to support Manthan and help those children shape their future by sponsoring their education. She emphasized the objective of Manthan to nurture a child at physical, mental, and spiritual level.

Thereafter, appreciating the endeavors of Rotaractors, trophy and certificate were presented to them by Swami Sumedhanand Ji.

This way, Manthan is marching ahead towards fulfilling its mission to provide supplementary education to under-privileged children living in slum areas and inculcating the moral values.

It's our privilege to work with DJJS. Our team worked very hard for this project and had a wonderful experience. We look forward to more such endeavours.

With an idea to set up a supplementary school for children living in slum areas, we collaborated with DJJS. It was an amazing experience while we worked on converting a donated factory outlet into a beautiful school. Now those children will be able to fulfil their wishes while studying there.

It's a great honour to be a part of Manthan, an initiative by DJJS. We wanted to give our best to this esteemed organization as the name speaks for itself. We wish Manthan good luck and hope it achieves more heights.