The Monthly Spiritual Congregation at DIPS Colony, Saundhi Enclave, Sheikhupur, Kapurthala, Punjab on 23rd February, 2020 was a mesmerizing event organized by DJJS by the grace of His Holiness Shri Ashutosh Maharaj Ji. Every month, this program satiates the inner urge of the devotees to remain connected with their Guru. The program always emphasizes on four commands of Guru i.e. selfless service, Guru’s divine audience, meditation and attending spiritual congregation. The disciples of Sadguru Maharaj Ji whole heartedly try to follow the same. DJJS representative, began the spiritual discourse with a soulful devotional song and hailing and praising the names of great souls Lord Ram, Lord Krishna and Lord Shiva. The preachers of DJJS said that just like a tree bears fruits so that it can feed others, a river is full of water so that it could quench thirst, likewise the great personalities incarnate on this earth to bestow peace and love on all beings. There is a simple anecdote from the life of revered Gurudev Shri Ashutosh Maharaj Ji, in which a disciple once asked Maharaj Ji a question. The question was- Did Lord Ram incarnate on the earth just to kill a few demons like Ravan, Bali, Meghnad, etc.? Though these demons were mighty and powerful yet they were mere earth dwellers. Why then no less than the lord of universe had to come down to kill them? Maharaj Ji responded- Great personalities incarnate with two purposes, first, to destroy the negative demonic powers that cause havocs and second, to re-establish peace and solidarity on earth so that dharma could prosper. In addition to these two main reasons of incarnation, the supreme soul descends on earth to present their divine audience to those pure souls who love God with all their hearts and minds, and those souls which long for communion with supreme. In Ram Charit Manas, the dialect version of Ramayana, Tulsidas Ji has said that Lord Ram had one hidden purpose of going to exile and that was to meet mother Shabari who had been waiting for Him for many years. Mother Shabari had no other desire in her life and after she received Lord as her guest, she left for her divine abode. She was an epitome of true love that a human heart could carry for the lord. DJJS representative continued by saying that though love comes in various forms, the one which is manifested through meditation is the purest as it is divine. Divinity is initiated on the seat of the soul through Brahm Gyan. Through Brahm Gyan, Guru plants a seed of devotion in the disciple’s soul. This seed not only leads the disciple on the path of righteousness but also fills the disciple with the acme of highest pleasure and divine love. Maharaj Ji has taught all his disciples the meaning of love and how it can cure all pains and makes one tread the toughest paths in life. With the strength of love, one can defeat the cruelest of enemies. Thus, Brahm Gyan is the binding force through which one sees all fellow beings as one’s brethren. The devotees who had gathered at the discourse rejoiced to their soul’s content as they received these valuable words of wisdom at the spiritual congregation. 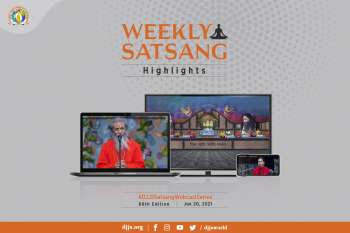 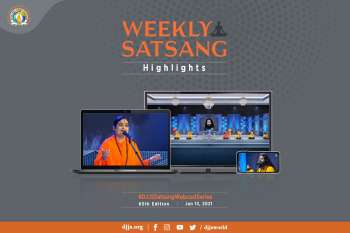 #DJJSSatsangWebcastSeries 65th Edition | What kind of a disciple are you? 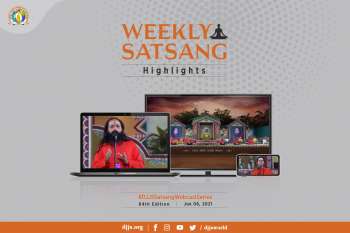 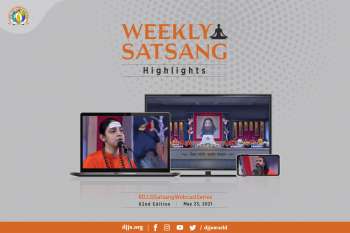 #DJJSSatsangWebcastSeries 62nd Edition | How to Guard Yourself Against Evil Forces