Monthly Spiritual Congregation - Recharging with the Colours of Divine Wisdom

Imagine there are no countries,
It isn’t hard to do,
Nothing to kill or die for,
And no religion too…..
Imagine all the people,
Living life in peace! You may think we are a dreamer, but we are not the only one. I hope someday you all will also join us and the world will act as a single unit. Unity in diversity is what our culture symbolizes to us. But we, the people of 21st century, have forgotten the golden rule i.e. “we are only strong as we are united, as weak as we are divided”. Divya Jyoti Jagrati Sansthan (DJJS) is working to attain this impossibly possible mission of uniting globe by providing them a recipe of mental peace. Uncountable numbers of devotees with the large number of preachers of HIS holiness ‘Shri Ashutosh ji Maharaj” has tuned into HIS mission of GLOBAL FAMILY OF PEACE. The same was echoed when DJJS organized their monthly holy spiritual congregation. The hymns of Vedic mantras purified the environment and scattered the vivid colors of happiness.

The session started with revealing the purpose of ‘Holi’.  Holi never simply meant to be just festival of colours, its purpose is deep and spiritual. It reassures the people of the power of the ‘truth’ as the moral of the story. The legend of Hiranyakashyap (devil and powerful king) and Prahalad (true believer & devotee of lord Vishnu) points to the fact that extreme devotion to GOD pays as He always takes his true devotee in HIS shelter; thereby ensuring victory.

Sadhvi sister also stated profoundly that a woman of today is entitled to get the equal platform and respect as that of the men. HIS holiness is carving Vedic women today, a woman who possesses a dignified character and propagates values to the generation.

The session concluded by organizing banquet for the large number for devotees. 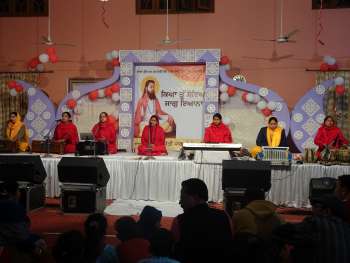