Ram Katha at Najafgarh, Delhi Awakening the Ayodhya of Lord Ram within...

A seven day Ram Katha started on May 24 in Najafgarh, Delhi with the beautiful recital of “Rudri Path” hymn which cleanses the surrounding with positive vibes and set the stage to grasp it. Sadhvi Praveena Bharti Ji, disciple of Shri Ashutosh Maharaj ji , Founder and Head of Divya Jyoti Jagrati Sansthan(DJJS). Sadhvi Praveena Bharti Ji depicted the Katha in a lapse of time; she covered the majors of Ramcharitrmanas. We are blessed and indebted to HIS Holiness Shri Ashutosh Maharaj Ji for giving this world such great katha orators who are trying their best to bring back the lost glory of our ‘vedas and puranas’. The devotees present over there were also witnessing the marvelous decoration of changing themes of stage on daily basis as per the context. Katha Orator told us with the example of LORD Rama’s life that his entire life is changed by one single event where HE fulfilled his father’s promise. Such was the power of words given to someone. By doing so, Lord Rama sent a message to entire humankind but look at the condition today; we are not what we say. Today’s people keep on boasting about themselves but the truth is we have become devil with self-centered mind. This generation doesn’t have the time but the need of the hour is to come forward to change the globe for the betterment of everyone.

RAM KATHA was mainly focused on the main theme of ‘Unity is Strength’, so let’s get united to make this world a better place to live in. It can only be possible through awakening the inner self with the help of “Brahmn Gyan” and practicing meditation on regular basis so that discrimination of all kinds gets vanished from our brain and heart. The mega event concluded on 30th may 2015.

The tireless effort of DJJS was really appreciable as in seven days; they gave a complete tour of Lord Ram’s divine play, explained the hidden message and discussed many social issues too.  The hearts of devotees which were filled with love for lord and spirituality were thanking DJJS for all their initiatives in a jovial manner. 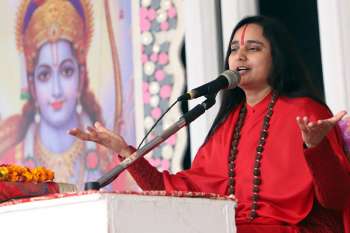