It is often said our character is largely formed by the kind of books we read. Going with this thought process, social initiatives of distributing spiritual literature has been taken up by DJJS (Divya Jyoti Jagrati Sansthan) from time to time. Several such initiatives were executed across many parts of India within last month. The Selfless volunteers of DJJS distributed the monthly magazine ‘Akhand Gyan’ and ACD / VCD Of devotional bhajans and spiritual discourse of the organization for free amongst the masses at Mela Ground, Near Gole Ka Mandir, Gwalior, Madhya Pradesh on Feb. 13th and 14th.  This way, around 5000 people were given the divine message of ‘Brahm Gyan’ (divine knowledge). 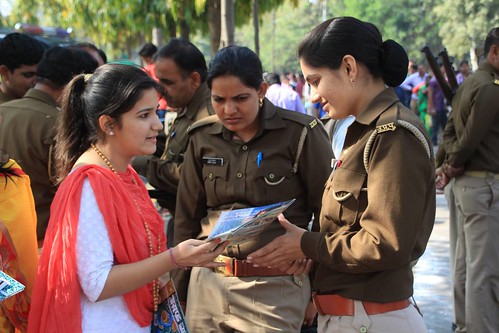 Another social initiative of women quality and empowerment, Santulan sprang into action on the occasion of ‘Maha Shivratri’ in Aughernath Temple at Meerut Cantt, Uttar Pradesh on March 7th. During the campaign, Santulan team, comprising of DJJS preachers and young volunteers had also approached the devotees and explained them about the true message of Shivratri. They also apprised the audience about various initiatives of DJJS and encouraged them to disseminate this information as much as possible so that world can become a better place to live in. Akhand Gyan magazine and book on Lord Shiva were also sold on the occasion. All the visitors were highly impressed with the dedication of the DJJS team and had praised their methodology of reformation of society via amalgamation of spiritualism and socialism.

Another national seminar on ‘Modern Commentaries on the Bhagavad Gita’ was organized by K.J. Somaiya Bharatiya Sanskriti Peetham as a two day event starting 21st March, 2016.  The venue of the program was Nalanda (Red) Auditorium, SIMSE building, Somaiya VidyaVihar Campus, Vidya Vihar (E), Mumbai in Maharashtra. Many high profile dignitaries expressed their opinion on the pious Bhagvad Gita. Some of the noted speakers were:

India’s spiritual history is laden with rich texts and insights. The need of the hour is to resurrect the history and made every human being aware of their supreme goal in life. A good beginning has paved the way to World peace. Let’s join the league and be the part of a grand goal. All are welcome!