Shri Krishna Katha Reverberated in the Hearts of Devotees in Jaitsar, Rajasthan

Miraculous tale of heart-throb Krishna began when he took birth in jail at midnight. Discourse of his life is filled with defeating demons, helping the needy and winning battles against iniquity. He lived wealthy life yet he was always dispassionate regarding bodily pleasures and believed in bliss of soul. To elaborate the life of Lord Krishna, Divya Jyoti Jagrati Sansthan organized a mesmerizing Shri Krishna Katha in Jaitsar, Rajasthan. It was arranged by DJJS Suratgarh Branch and stared from 3rd October 2017 and continued till 7th October 2017. DJJS is a socio-spiritual organization founded and headed by His Holiness Ashutosh Maharaj Ji with the colossal aim of world peace. 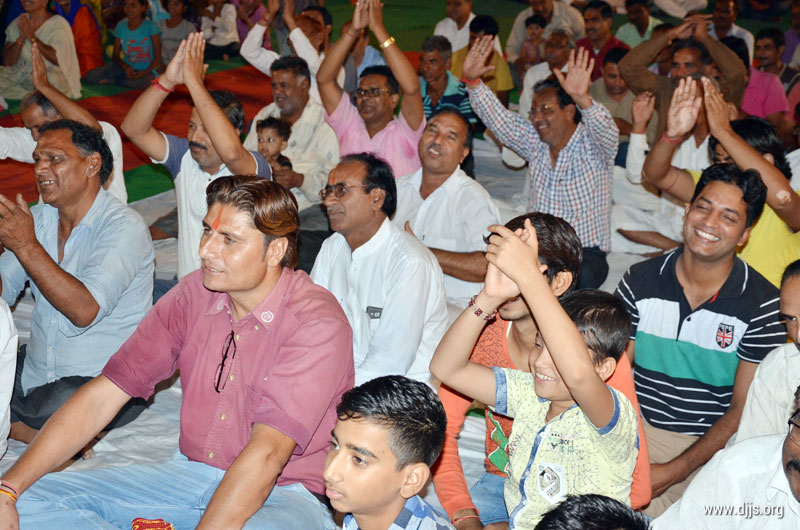 Katha was preceded by Kalash Yatra and began with festive mood to celebrate the joyous life of Krishna’s childhood. Heartwarming bhajans were sung by volunteers of Sansthan. Sadhvi Jayanti Bharti Ji, disciple of Shri Ashutosh Maharaj Ji was the orator of ‘Krishna Leela’ and she explained inherent message behind each Krishna Leela impeccably. She mentioned Krishna as the Avatar of Lord Vishnu who took birth to end the suffering of devotees and create a society where everyone is equal. At the age of sixteen who was declared as ‘Jagatguru’ which means the one who is guru of the universe. In his lifetime he killed many villains giving lesson to every individual that we have to kill our demons that reside in our hearts and create the feeling of envy, lust, greed and anger etc. She also explained the selfless love of Gopis towards Krishna depicts the stories of true discipleship. Though they lived common lives of householders but their hearts were always enchanting the holy name of Krishna, giving us examples of how a devotee should live. One of the greatest contributions of his mortal life, ‘Shrimad Bhagwat Gita’, also known as summary of all the Vedas was a conversation between Krishna and his mate Arjun. In the battle field of Kurukshetra, Arjun fought with inner demon of attachment before fighting religious war with his family. He was able to do so because he came to Jagatguru of that time, Krishna for the guidance. Krishna blessed Arjun with the Brahm Gyan right in the battlefield, an eternal science of self-realization which helps one conquer the negativities of the mind and rise above them to do what is beneficial for all. Only after realizing our soul, society can come together and create a peaceful world. Jagatguru of this era, Shri Ashutosh Maharaj Ji is bestowing each of his disciples with same divine knowledge of Brahm Gyan which is the baseline of peaceful world. Katha ended with epic response as devotees were willing to adopt same philosophy in their lives and serve society.