Shri Ram Katha at Rohini, Delhi – 'A Communion with Spiritual Self'
All Categories

Shri Ram Katha at Rohini, Delhi – 'A Communion with Spiritual Self'

"Rama is the embodiment of righteousness, he is an equable person with truthfulness as his valour, and as with Indra to all gods he is the king of entire world.” Sri Rama is oftentimes called the paragon of humanity, an example of the perfection of human nature. He was adored as the very embodiment of Dharma and had exemplary nature of conduct. To reiterate the spiritual significance of the life and deeds of Shri Rama, Divya Jyoti Jagrati Sansthan conducted Shri Ram Katha at Rohini, Delhi from 17th to 23rd November, 2018. Various dignitaries also marked their presence in the program. The D-live telecast of the Katha was telecasted on Aastha Channel from 19th to 25th November, 2018. The grand program of Shri Ram Katha was also captured in various esteemed newspapers like Dainik Jagran, Veer Arjun, Qaumi Patrika, Bharat Darshan, Jagat Kranti, Human India, Gurgaon Today, Dainik Khabre, etc. The transcendental bhajans filled the atmosphere with mystical emotions.

The Katha orator, Sadhvi Deepika Bharti Ji, beautifully narrated the entire Katha thereby revealing the hidden spiritual significance in the acts and deeds of Shri Rama. She explained that Rama Rajya was a kingdom, where there was no fear of crime or criminals, enemy countries, draught, cyclones or floods, where agriculture flourished and food was abundant, where people followed Rama’s path and lived happily. Where arts and crafts flourished, where people got justice immediately from Rama, even in smallest things. People of Ayodhya loved him as a flawless and he resided in the core of their hearts. Further, explaining the essence of the Katha the Orator said that Rama stands for the light within us - the self, Sita is the mind that went after desires (deer), Lakshmana stands for awareness, Hanuman stands for devotion and Ravana stands for ego. When the mind (Sita) goes after desires, it gets away from the self (Rama). Eventually, ego (Ravana) takes over the mind. With the help of awareness (Lakshmana) and devotion (Hanuman), ego is defeated and mind is restored back to the self (i.e., Sita is brought back to Rama). Ramayana is happening every day within everybody. Our mind gallops on one desire after another and eventually we become egoistic forgetting our true self. With awareness and self-realisation (Brahm Gyan), we get the mind back to the source which is true love and light.

Our great ones and sacred texts exhort vividly and unanimously that spirituality dawns in your life only after direct communion with your spiritual self, the soul. But this direct communion with your soul, involving the direct perception of your soul, can be established only after the achievement of Divine Knowledge or Brahm Gyan by the grace of a bonafide guru. Thereupon, when one walks steadfastly on the path of spirituality as revealed by the Perfect Master, discriminative faculty is gradually awakened, enabling one to discriminate between the real and the unreal. Thus, the Katha successfully concluded revealing the spiritual indications inherent in the acts of Shri Rama. 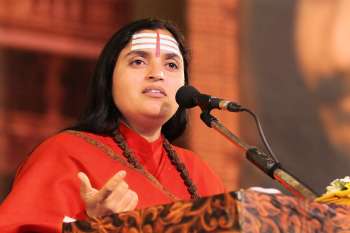 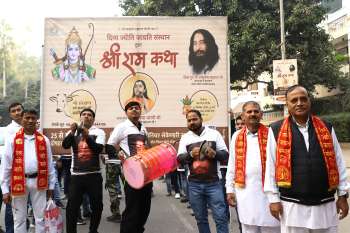