Shrimad Bhagwat Katha Re-Educated the Masses of Haldwani, Uttarakhand the Spiritual Essence of the Vedanta Literature
All Categories

Shrimad Bhagwat Katha Re-Educated the Masses of Haldwani, Uttarakhand the Spiritual Essence of the Vedanta Literature

Under the supreme guidance of Shri Ashutosh Maharaj Ji (Head and Founder, DJJS), Divya Jyoti Jagrati Sansthan (DJJS, a socio-spiritual organization) organized 7 days Shrimad Bhagwat Katha from 24 to 30 Dec, 2022 at Haldwani, Uttarakhand. Large number of devotees gathered and actively participated in the Katha of their beloved God Krishna. The listeners could be seen totally absorbed in the soulful devotional songs. The Katha orator Sadhvi Vaishnavi Bharti Ji (Preacher disciple of Shri Ashutosh Maharaj Ji) impeccably narrated the katha with shlokas and explained the spiritual significance of the same. She stated that Shrimad Bhagavatam is the very essence of all the Vedanta literature. One who has enjoyed the nectar of its rasa never has any desire for anything else.  She further mentioned that it has been more than 5,000 years now since Lord Krishna’s existence. Yet, even today people worship him with utter admiration and take his name with so much of adoration in their heart. Krishna was born at midnight in  a prison. That night heavy rain had created a surge in the rivers. Yet Vasudev was determined to take his son out of prison to a safe place. The entire universe cooperated Vasudeva who was carrying his child in the heavy rain that was flooding all over. The prison doors opened itself, making a way for him to go. The river Yamuna lowered its flow so that Vasudeva could cross the river.

Each and every divine sport of Lord Krishna’s life is filled with deep secrets, which holds supreme significance in today's era also. His countless fascinating stories are a source of joy and inspiration for people of all ages. He made an indelible impression upon mankind's consciousness by re-educating the world about spiritual enlightenment. Lord Krishna shows all His devotees how to balance materialism and spirituality. His life is a perfect example of how to remain calm in the midst of worldly fire. He was able to remain disconnected and thus perform flawlessly. “Bhagwat Geeta” is the greatest gift to mankind by Lord Krishna. It's guidance towards a perfect life for millions of people around the world as it gives solution to all the problems of life.  The Bhagavad Gita, which makes one aware of the sources of an ideal life, has proved to be a guide for all mankind. Further, the Katha orator explained that the Soul is the part and parcel of the Supreme Soul and is an endless treasure of eternal joy, which can be attained only upon spiritual enlightenment. Only the Perfect Spiritual Mentor of the time can lead a human being to this eternal bliss by educating and bestowing “Brahm Gyan”, which leads to correct and eternal method of meditation.

The purpose behind the recitation of katha is - Brahm Gyan (Divine Knowledge), which is an Eternal Technique through which one can practically experience God. The katha delivered the message of spirituality and peace making it a great success. Everyone was coloured in the colours of spirituality. 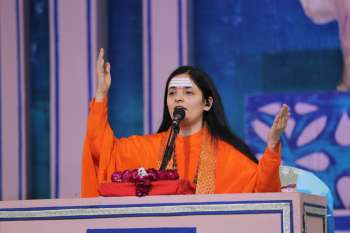 Peace March Inspired the Masses of Pul Prahladpur, Delhi to Discover the Source of Eternal Bliss through Brahm Gyan