It has been a proud moment for India to have brought the subject of ‘Yoga’ to the International platform. And, UN declaring 21st June as International Day for Yoga is yet another landmark in the history. This day has universally thrown a torch on the need for overall fitness of every being, reviving the Vedic traditions and ingraining the yogic practices amongst people. 21st June – The Big day is no less than a movement as each and every segment of the society will be connected with Yoga. Antarkranti, an initiative of Divya Jyoti Jagrati Sansthan utilized this platform in connecting the prisoners with Yoga. ‘’Yoga Karmasu Kaushlam’’- Excellence in Action is Yoga, echoed in the hearts of prisoners. Inspite of being disconnected from the mainstream society, the event- ‘Yoga in Prisons’, genuinely linked each prisoner with the outer world through the common thread of ‘Yoga’ 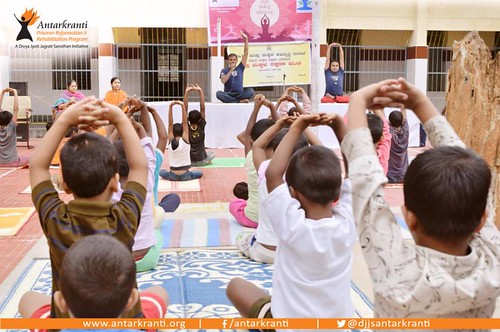 Antarkranti organised ‘Yoga Week’ through various “Yog Shivirs” which were conducted in the following jails:

The Yoga Shivirs were infused with the teachings of Pranayam & various Aasans, practicing of Dhyan by inmates, and an engrossing lecture on Yog & Spirituality. The Yoga Fever was seen among the prisoners with the total record attendance of 5000 prisoners. The Yoga Week inked multi-dimensional benefits for the prisoners. It was a week filled with ‘Contemplation on Self Actions’, ‘Health & Yoga’, ‘and Controlling & Maintaining Balance over Mind & Body’.

Yoga in Prisons received a tremendous recognition both inside and outside prisons. The event garnered an excellent response from the participants and motivated them towards a healthy and balanced living.