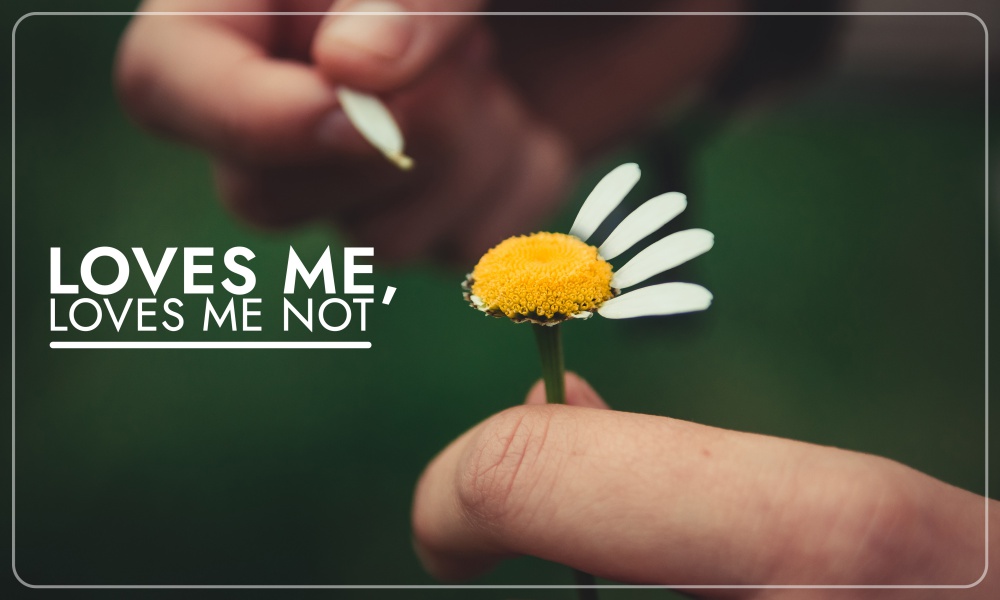 ‘Effeuiller la marguerite’ which means ‘loves me or loves me not’ is epistemologically a French phrase and is often used by people who seek to determine whether the person they are attracted towards returns that affection to them or not. The person practicing this exercise alternately speaks ‘He (or she) loves me’ and ‘He (or she) loves me not’ like a question to his (or her) own self. This would definitely have made you feel nostalgic and taken you back to your teenage days where you used to play this game and pluck one petal off from a flower, for each recital. The end note of the phrase ‘loves me, loves me not’ corresponding with the last petal would decide if the person loves you. ‘Loves me’ note would take the gamer to the seventh heaven of happiness. But is that happiness everlasting is a question mark?

Sri Paramhansa Yogananda says in his book ‘The Divine Romance’, “The world as a whole has forgotten the real meaning of the word love. Love has been so abused and crucified by man that very few people know what true love is... Think deeply about what I am telling you. The satisfaction of love is not in the feeling itself, but in the joy that feeling brings. Love gives joy. We love love because it gives intoxicating happiness. So love is not the ultimate; the ultimate is bliss. God is Sat-Chit-Ananda, ever-existing, ever-conscious, ever-new bliss”.

But the irony of opportune human life is that in spite of being individualized Sat-Chit-Ananda, we hanker after love of mortals and become miserable. The other day I was seeing a video that went viral like crazy. It showed the case of an Air Force Pilot’s young, dynamic and beautiful wife who met with terrible accident that eventually changed the route of her life. Though she sustained several major injuries including broken bones in her arms, rib-cage, shoulder blade, collarbone and spine and her lungs and liver were also deeply cut; but post-surgery she was left paraplegic (paralysis of lower half of body). She was bed-ridden for two years. Fortunately, the physiotherapy helped her recover enough to use a wheelchair. In the course of events, the most breaking episode she faced was she was abandoned by her husband and left alone.

Another star case study that can wrinkle anyone’s heart was the mystery of death of a renowned Bollywood actress who was deeply hurt by the acts of her beloved boyfriend. A six page suicide note was found which indicates that she planned to end her life because she was extremely depressed and dragged owing to multiple reasons arising from her love relationship. “I HAVE LOST EVERYTHING… I AM BROKEN INSIDE.” These lines clearly state her anxiety and emotion that she was unable to handle so much sorrow and pain. She seemed to be alone and distressed all together. “YOU TORE MY SOUL… I HAVE NO REASON TO BREATHE ANYMORE.” Another few lines which she added is again a clear depiction of her being deeply hurt by the person whom she loved the most and was attached to. The note also pointed out that she was pregnant and went under abortion. She lost her confidence and self-esteem which drifted her away from her ambitious career. She could entirely feel the footsteps of her destruction which emotionally may have suffocated her to the pinnacle point of resilience.

The whole picture created above screams for a search of solution and an answer to the question whether or not in this world there’s anything like true love? This reminds me of a throwback from annals of Upanishadic wisdom.  Once there was an Acharya known by the name, Atri. He had a daughter whose name was Apala.  Apala had some marks on her body. As she was growing, the marks on her body also kept on increasing. The growing marks on Apala’s body were a constant stress for the Acharya. He thought that if leprosy would spread on Apala’s body, no one would marry her. She would be a burden for him for the rest of his life. Thinking this he married Apala to one of his disciples. Apala was very sad with this act of her father. Her married life went hail and hearty for some time but with the passage of time, her leprosy kept on increasing. Slowly her whole body got affected with the deadly disease. She started smelling bad. Due to this disease, the love of her husband got transformed into hatred. As a result, one day Apala’s husband turned her out of his house. Now where should she go? Because her father had married her to get rid of her.  Apala was perturbed. Crying, with a sad heart; she started walking towards the jungle.

On her way, she encountered a saint. Seeing Apala in such a pitiful condition, the saint stopped. Apala bowed to the saint and the saint instantly raised his hand to bless her. Apala fell at the feet of the saint and cried bitterly. The saint noticed how Apala’s body smelled due to the wounds of leprosy. The Mahatma compassionately took Apala along with him to his cottage where he heard her painful story. Then he explained to her, “This world is filled with pain and selfishness. In this illusory world no one is happy. Every human being is deeply engrossed in worldly deeds with the hope deriving some happiness. But they are not able to catch and preserve the joys to last forever”. Then, the saint furthered specifically talking about Apala as an individual soul. “O Apala! Verily, this disease is due to the bad karma of your previous births. That’s the reason you were deserted by your father and husband also. We all have to bear the consequences of our past karmas”.

Apala was moved by the enlightening words of the spiritual master. The mahatma continued, “Apala, you have got a human garb, that’s why you capable of telling me your pain and agony. But think about animals, they also suffer from various deadly diseases. They also get wounds on their body where worms can be seen creeping over them and they are hardly able to do anything to get rid of their sufferings and pains. The Human birth has been ranked as the crown in all the births (species) because only in human body, one can get rid of the bondages of previous births. But what happens is, in this world, in order to get rid of one bad karma, a person gets into performing another new karma and that another karma gives rise to further new karmas. This is actually the cause of the whole complex cycle of life and death”.

HH Ashutosh Maharaj Ji explains, “As one seed can give birth to a tree and from its fruits many new seeds emerge and give birth to more trees; the same happens with our karma too. Therefore, karma has been symbolically connoted as seed in ancient scriptures. So, in order to get rid of the mesh of karmas, the only way is to burn them off in the divine fire of soul or pure consciousness. It is just the way we put seeds into fire to completely smash their potential of sprouting further”.

The saint explained to Apala that the importance of human garb, which has been granted in order to attain God, who is himself the supreme everlasting bliss. Apala apprised the saint, “I have no one in the world. You have showered mercy on my by not just giving me place in your cottage but also blessing me with divine wisdom… You have heard my sad story patiently. Now, tell me how I can be released from the worldly bondages? I beseech you to shower your grace on me and grant me that key or knowledge to get connected to my godly-self, my soul or pure consciousness”. Then, the saint blessed Apala with Brahmgyan (the Divine Science of God-Realization). Subsequently, Apala got into regular practice of Brahmgyan based meditation and sought the everlasting bliss within her.

Time passed by, Apala continued with her meditation. One day God manifested before Apala while she was meditating on the divine light inside her. Apala got enormously excited.  Seeing her devout love for the Divine, God said “O Apala! This leprosy has given you a lot of pain. Due to this your father married you off, and after marriage due to this contagious disease, your husband disowned you. This disease caused a lot of humiliation to you. If you wish, I can cure this deadly disease of yours.” But astonishingly, Apala said, “O Lord! Due to this disease only, I have confronted the reality of the world. Leprosy is the result of my own deeds. So why should I blame anybody for it? Today this ailment has detached me from this world and has united me with You. Therefore, if you want to grant me something, grant me the love of your lotus feet. Give me the power so that I can spread the message of true love among people. God said, “Evamastu!” and disappeared. Apala started spreading the message of God’s devotion to humanity. Slowly, her disease also started getting cured. One day, Apala got absolutely rid of her leprosy. The dint of Apala’s meditative powers spread in all directions. The news reached her husband too. He hurriedly came to meet her. And he was amazed to see Apala’s face glowing with happiness. Apala recognized her husband. The man asked Apala for forgiving his sins and urged her to return home with him. This was the moment; Apala chose the immortal dignity that had come to her through God-Realization and its constant practice in the form of Brahmgyan meditation, over and above the mortal love and affection of the mortal world.

This International Women’s Day 2020, let’s get inspired by Apala. We also while away our life in seeking mortal love from different relationships; many times from our kith and kin and many times from others around in daily work home life. Till when we shall keep on gauging who loves us and who doesn’t? Therefore realize! This human life is colossally precious. No relationship can bypass the significance of the ultimate relationship with God or Soul or Pure Consciousness i.e. our true self.

Like Apala, women of 21st century too need to rise in love, and not fall. It is only the Divine Love that makes one rise above the vulnerabilities of constant thinking, They Love Me or Love Me Not.