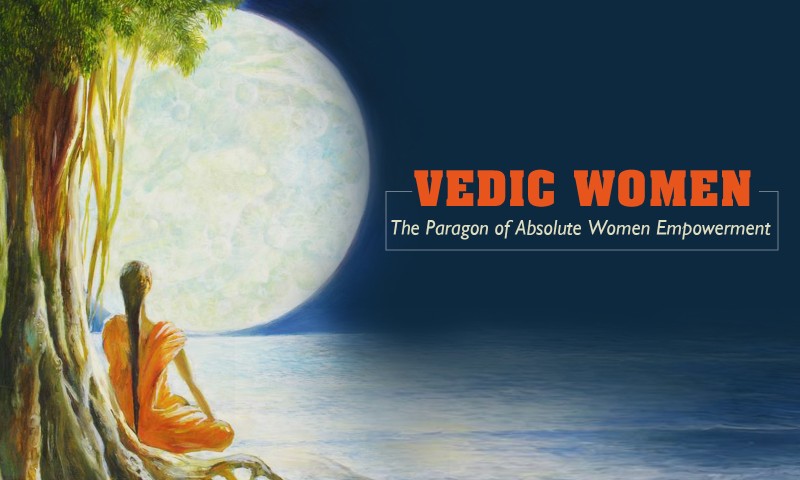 In Indian classic literature like Ramayan, Mahabharata and the compendiums documented by Rishis in the form of Vedas and Upanishads, there’s a categorical mention of a good number of learned and educated women. Some of the names from Vedic & Upanishadic period are – Aditi, Shiva, Vapula, Maitreyi, Gargi, Apala, Lopamudra, Shrimati, Vedvati, Dharini, Romasha, Sulabha, Yami, Indrani, Siddha, Swadha… Then, in the famous epic Ramayan, we find mention of King Janaka’s daughter princess Sita going to gurukul, participating in intellectual discussions in the court of Janaka; we find mention of Rishika Anusuya who was an environmentalist at that time of history. With her intense efforts she brought the ten year drought in the forest to an end by making for the channelizing of the Ganga river stream for that place. We also find mention of Queen of King Dashrath known as Kaikeyi. She was a well versed marshal, a warrior who used to help Dashrath in the wars. The Mahabharat talks about Queen Kunti giving birth to children by the advanced technology of parthenogenesis. There are a lot of examples. And all these prove that women were educated and not at all dependable sorts.

The Irony of Women Empowerment

Empowerment means moving from a state of powerlessness to that of powerfulness. However, we must think over what this term power actually means? Today we have so many feathers attached to a woman’s hat – women are well educated, they are self-dependent, they are the breadwinners too for their families, women are flying fighter planes, we have women who are astronauts travelling to other planets outside earth, women are excelling in finance and accounts too. So all the dogmas like non-feminine settings of work seem to fade out… But in spite of all these achievements and heights, can we really say that women today are truly empowered? What about the dignity of her opinions? What about true respect for her in the hearts too? Well, this is ironic. Women have scaled heights but they continue to be victims of abuse and violence.

There is a news article in – The Washington Post, 2018 that describes a case of year 2017 where a man admitted that he had beaten his wife with a cricket bat and forced her to drink bleach, why? because she was an intelligent woman. No other reason for that violence. And this is not just one case. World over, women are facing such offenses.

There’s a survey conducted by Harvard T.H. Chan School of Public Health. It says – Younger women and college-educated women are more likely to say that have experienced slurs, offensive comments, and harassment.

However, looking back in the Vedic and Upanishadic periods, women were able to exercise their will, break stereotypes in the society, challenge the prejudicial doctrines, facilitate projects of societal development and also earned true respect.

Let’s first understand what it means to be a Vedic woman? The word Vedic means of or relating to the Ved. Ved comes from the Sanskrit root – Vid, which means – to have perception of the Atman within, that is a state of awakened consciousness. Now what is the relevance of this state with the concept of empowerment? Well, this state of awakened consciousness actually paves for the realization of – Absolute Empowerment.

Four case studies of women - who are all not from the Vedic period but are all Vedic women and embodiments of Absolute Empowerment:

Vedic Woman 1 [Gargi Vachaknavi]: Gargi was from the ancient period. She, being awakened at the level of Atman or consciousness practised its mindful meditation for years and raised the level of her consciousness and therefore potential as a whole. She came to be known as Brahmavadini. Brahmavadini Gargi is famous for challenging groups of scholarly men in a high level international summit of her times over the subject of Brahman – the supreme consciousness. Not only did she challenge them with her questions but also earned a stature of dignity in the hearts of people. She started being revered as a highly intellectual woman. This woman ascetic also used to run kanya-gurukuls i.e. schools for girls. So clearly, not only did she was a practising model of absolute empowerment but she also inspired others to become the same. In fact it would not be an exaggeration if I say that any woman who gets awakened at the level of her Atman or consciousness will definitely exhibit higher potential like Brahmavadini Gargi.

Vedic Woman 2 [Saint Meerabai]: Meera, a learned woman of the medieval period and from an economically strong background, having all perks in life, when got married; she faced many challenges because of the prejudicial cultural doctrines prevalent in the society at that time. Women were forced to get burnt with their husband’s death commonly known as Sati-Pratha; women were forced to practise the custom of Ghunghat i.e. covering of face all the time and many more stereotypes. Though Meera was bold since her childhood only but through the phenomenon of awakening of her Atman by the grace of perfect saint of that time – Saint Ravidas, Meera was able to raise her strength and exercise her will power to a level that she not only objected the age old beliefs of the society but also became instrumental to change them. At her husband’s death she stood against the custom of bride-burning and faced the society all alone. But later, because of her rational approach and logical belief system of religion, she earned support from a large part of the society, which became her follower too. Meera came to be known as Saint Meerabai.

Vedic Woman 3 [Sister Nivedita]: Sister Nivedita from the 20th century whose actual name was Margret Elizabeth Nobel, born in an Irish family. She got spiritual awakening by Swami Vivekananda. Now this is the most contemporary example. Having received the awakening of her Atman, she would meditate for long hours. And this ignited in her an unimaginable philanthropic concern. The horizon of her compassion rose to the level that she served humanity even outside her country and dedicated her life to it. Sister Nivedita earned dignity in the hearts of people of the then time as well as the generations to come.

Vedic Woman 4 [Saint Toral]: Saint Toral from the 20th century used to conduct spiritual discourses in a holy place and lived a pious life of celibacy. One day a dacoit entered the shrine in the guise of a devotee but with pervert intent of abducting the single woman – Saint Toral. However, while discoursing, Saint Toral came to know about him through her intuitive powers but she continued to discourse fearlessly. After all the devotees left the place, Saint Toral directly said to the dacoit – what do you want from me? He expressed his desire to take her along. She knew how to handle such demonic people. She said – okay, I will come with you. He was stunned. On the way, the ascetic lady continued to contemplate deeply over her awakened Atman. The dacoit not only couldn’t touch her, but also all his pervert desires faded away. And a few miles away, he bowed at the saint’s feet.

Aforementioned instances of women who exemplified the true meaning of Empowerment guide us to build a better world where women can become Vedic even in the contemporary times, if they are able to receive awakening of the Atman, the consciousness within by the grace of a bonafide Spiritual Master. Here, we can conclusively say that even the package of educational, economic, socio-political empowerments is incomplete if it is not supported by the innermost dimension of spiritual empowerment which is awakening of the Atman, the consciousness. This is the fundamental that I [author] have come across and not just learned from the teachings of my spiritual master His Holiness Ashutosh Maharaj who is the Head of the non-profit social spiritual organization Divya Jyoti Jagrati Sansthan; but also practically realized it.

This absolute empowerment is possible even today in the 21st century. Hence, the term Vedic cannot be restricted to a particular era or time. Even after the so-called Vedic era, women who have been awakened at the level of consciousness are Vedic only. And this is not just in name but in value too. This was explicit from the cases of Saint Meerabai, Saint Toral and Sister Nivedita. And I would also like to state here before you all that in the organization DJJS, even today women and girls are being fetched with awakening of the latent power of Atman or consciousness and hence are being made embodiments of absolute empowerment. The organization DJJS has come up with an adage for these spiritually awakened women of contemporary times, it is – 21st Century Vedic Women!