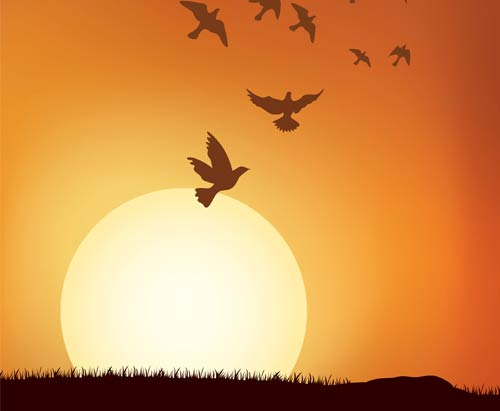 A large black bee was flying around with a reverberating humming sound. It reached close to a lotus blossoming under the brilliance of the resplendent sun. The black bee became besotted and seated itself on the fragrant bud. With the sun beginning to set, the fascination of the black bee kept rising. Sunset marked the shrinking of petals. The bee intoxicated by the sweet smell did not budge and got itself imprisoned, meeting the inevitable end.

A flame of fire was burning. A moth sighted the golden red emission of light, got attracted and lost its life in the blazing fire.

All these examples demonstrate the outcome of attachment to and fondness for the lure of the senses. One significant point, which deserves our serious consideration, is that when one sensual desire can lead to such a disastrous outcome, what could be the plight of man who is in the grip of all his five senses? Is it not a matter of serious concern?

According to Sigmund Freud, the Father of Psychology, Desires are man’s natural proclivities. They should be allowed to flow freely. Forced subjugation often proves dangerous; for, subjugation can never wipe out desires completely. In doing so, we allow them to make our sub-conscious mind their home. Here, they produce fierce sensual desires. This, in turn, leads to mental distractions. They look for an opportune time to surface, so that they can burst out in an explosive form.

Indeed, the argument of psychoanalysts is logical. The fact of the matter is that spiritualists also hold the same view. Lord Krishna had said in the Bhagavad Gita, “Abstinence from food can keep sensual objects at distance, but not the desire or attachment to them.” It has been beautifully said in the Ashwaghosha*, “Your celibacy is of no avail if you are adulterous in mind.”

Does it mean that senses should be left of their own accord? Even if we allow senses to consume whatever they wish to, we would never be contented. The power of the senses increases with every additional consumption of a sense-object. They go on desiring and demanding more and more. As a matter of fact, desire is like an internal chain reaction. If you are even slightly interested in science, then you must have heard this term. It occurs in the process of making an atomic bomb. In this process, a radioactive element called Uranium is made to react with a neutron. As a result, Uranium not only disintegrates but creates three new neutrons. These neutrons further react with other atoms of Uranium. Resultantly, nine new neutrons come into existence. These nine neutrons, in turn, repeat this process. This chain reaction keeps repeating and expanding without break. Thousands of neutrons are produced in the process. Enormous energy is also released. It is this energy, which makes atomic bombs highly destructive. Let us ponder whether this chain reaction does occur in our desire-filled heart… Whenever the neutron of desire strikes with a desired object, does our desire get satiated there and then? Certainly not! Fulfilment of one desire leads to many other desires. This play of desires shows no sign of let up. And the fire of sensuality keeps inflaming within. We remain a flame of fire throughout our life. Spiritualism, therefore, essentially holds the view that “We do not consume objects of pleasure; rather, it is the sense-objects that consume us”.

It is crystal clear from the aforesaid discussion that the solution of the problem is neither subjugation of desires nor the free flow of desires. Then, what is the alternative? Providing a sure-shot solution, Lord Krishna says, “Man attains release from sense-bound maladies after the direct perception of God.” How can attachment to senses be obliterated through the perception of Supreme Brahm? A simple psychology underlies this statement. It is normal human tendency to forego an inferior object when given a superior object. God denotes eternal bliss. How can then any pleasure of the world compete with it? On perceiving the Supreme Brahm, the soul drinks from the pool of trans-sensuous eternal bliss. Before this bliss, all other pleasures of the world are but subordinate. Consequently, attachment to sensual pleasures automatically relents. A philosopher has put it beautifully – ‘a dog of an affluent person does not eat from the dustbins kept at different places.’

In the end, I would say that carnality cannot be altogether obliterated. But yes, it is possible to sublimate desires. Desires and attachment to sense objects can be turned God-ward by perception of the Supreme within through Brahm Gyan: Spiritual Knowledge.