Yogi Satyamurti had been one of India’s accomplished yogis capable of entering the state of Samadhi (trance). Since ages, the Samadhi or a trance like state often undertaken has been a medium adopted by saints and seers to accomplish a task that they have decided for the benefit of mankind. The yogi could stop processes in his physical embodiment by wish and resume after a period depending upon the task completion.

In their research paper, ‘An Unusual Demonstration’[1], doctors LK Kothari, Arum Bordia and OPGupta of Rabindranath Tagore Medical College and Hospital, Udaipur, India, presented the case of Yogi Satyamurti, a sixty year old man of weak built who was confined to a small underground pit for eight days. According to the Yogi, it was a state of "Samadhi", i.e. deep meditation, with all bodily activities reduced to the barest minimum. A1.5 metre cube pitwas dug out in an open lawn surrounded by the Medical Institute buildings. To ensure complete isolation, the pit was perfectly sealed from the top by bricks and cement mortar. To keep track of the physical activities, an ECG was continuously monitored during these eight days and numerous laboratory investigations were carried out before and after the time period.

Figure A demonstrates that the 12-lead ECG recorded before closing the pit was within normal limits.It increased progressively, reaching a heart rate of 250 per minute on the second day as shown in Figure B.To the astonishment of medical experts, the ECG tracing was replaced by a straight line at 5:15 pm on the second day, when the yogi had been inside for about 29 hours as depicted in Figure C. To make sure that everything was observed with minute details, the team tried different leads and higher amplifications, but there was no electrical disturbance of any sort. There had been no slowing of the heart or signs of ischemia preceding this. 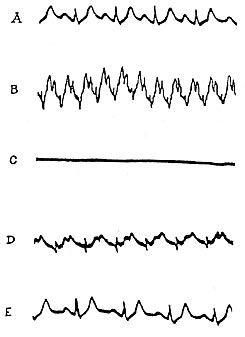 The bewilderment within the medical community continued as the straight line on ECG persisted till the eighth morning. The electrical activity returned about half an hour before the pit was scheduled to be opened. After some initial disturbance, a normal configuration appeared. No other significant abnormality was noted in the ECG (Figure D).

Finally, when the pit was opened on the eighth day as per instructions of the Yogi, the ECG was again found within normal limits (Figure E).The doctors were amazed as it was difficult to believe that the Yogi could have completely stopped his heart or decreased its electrical activity below a recordable level. However,it was proved right in front of their eyes, though they had no satisfactory explanation for this supra-medical state of the Yogi.

This case of Yogi still pertains to be one of the most challenged curiosities of medical science. Although, the fact is that it is only one of those that have been examined, tested and proved;while there are scores of those that go unrevealed or unapproved due to lack of our willing attempts or instruments which can detect them.