DJJS Plugged in the Youth of Apeejay Institute, Jalandhar Spiritually and Inspired them to Awaken the Nation's Esteem
All Categories

DJJS Plugged in the Youth of Apeejay Institute, Jalandhar Spiritually and Inspired them to Awaken the Nation's Esteem

“Arise, awake and stop not that till the goal is reached” was the clarion call to the youth from a patriotic saint, Swami Vivekananda and his message resonates with us even today. The youth of India owns abundant ideas that have the potency to make our nation glorious. But the need is to awaken them to their soul-consciousness which alone can bring realization that their all actions will leave a vital impact on not just their own lives or family but the entire country. The need is to imbibe in youth that vigour and unflinching pride for the nation that Vivekananda articulated throughout his life. On the eve of Swami Vivekananda’s birth anniversary, Aeepjay Institute of Management Technical Campus, Jalandhar celebrated ‘Youth Day’ with musical concert on nation building organized by Divya Jyoti Jagrati Sansthan, founded and mentored by His Holiness Ashutosh Maharaj Ji. Sadhvi Garima Bharti Ji and Sadhvi Radhika Bharti Ji along with the chief guest Shri Sunil Jyoti (Mayor, Municipal Corporation, Jalandhar) inaugurated the event.  Sadhvi Garima Bharti Ji propelled the youth to take initiative and contribute in building India that will make one and all proud.  She called for the young audience to take an oath of following foot prints of Swami Vivekananda throughout their life for cultivating unflinching love for the nation. She further added that Swami Vivekananda’s life principles can be the reservoir of inspiration for the combustible younger generation of this country.

The mesmerizing and melodious concert of national songs enthralled the audience to the core and filled the atmosphere with message of peace and tranquility. Sadhvi Ji also highlighted the grave issue of drug abuse in our society and initiatives taken by DJJS to spread the awareness towards eradicating the   same. She explained how each person can contribute for the cause and motivate others. The key aspect which leads to the making of a real youth, i.e. the science of Self-realization through the technique of Brahm Gyan was emphatically highlighted by Sadhvi Ji and also by the team of devoted musicians in the concluding phase of the program. The participants found themselves greatly privileged on attending the program and were seen brimming with new zeal and spirit to work on to bring about the change. The chief guests sensitized the gathering and applauded the youth community for their valuable contribution to the society.

Guru Puja Resonated with Gratitude and Prayers at Nurmahal, Punjab 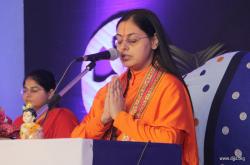