Divine supreme beings descend on this planet time and time again to provide guidance to the lost and confused humans. Guidance, such as the one provided by Lord Krishna, has the ability to transform one’s life for good. Teachings of ‘Bhagwad Gita’ have the power to transform a person’s perspective and provide the right guidance irrespective of the situation and time. However just as Arjuna was not satisfied by mere teachings, until he had the practical realization of the Lord Himself, mere words can further confuse a seeker. Therefore, Lord Krishna promises to mankind that ‘I will incarnate on the earth to remind you of the right path’. To instill the righteousness and to show the right path, Shrimad Bhagwad Katha Gyan Yagya was organized by Divya Jyoti Jagrati Sansthan (DJJS) from September 17 to 25, 2016 in Ludhiana, Punjab. Seekers from near and far took advantage of the pious Katha during these nine insightful days. World-renowned Katha orator and daughter disciple of His Holiness Shri Ashutosh Maharaj Ji (founder and head of DJJS), Sadhvi Vaishnavi Bharti Ji, enlightened the audience with Lord Krishna’s divine plays along with the hidden secrets and motives behind them.

Sadhvi Ji explained that it is lord’s endless love for His souls for which he showers HIS divine presence on the earth in every era. Just as when a child is in danger, the parents are at unrest, Lord too cannot stand the sufferings and misery of his children. Therefore, Lord manifests as messiahs, prophets, gurus, avatars, and messengers to guide His very own. He does not discriminate between groups, sects, races, or backgrounds. In turn disciples, those who imbibe His teachings, find themselves above all disparities of the world. The real issue is how to recognize a true guru. According to the scriptures, a true Guru has the divine eye and has the capability to open the same for the disciple after which Lord can be realized and not just believed. Sadhvi Ji gave present day examples of inmates whose lives have been transformed in Tihar Jail in Delhi under the project ‘Antarkranti’. These individuals who were once criminals have now become harbingers of peace, love, and brotherhood. The silver bullet was ‘Brahm Gyan’, the most ancient practice of self-realization, which enables one to go deep within the realms of spirituality. As a devotee practices the technique of Brahm Gyan, Sadhvi Ji states, one feels spiritually blissful, experiences a peaceful mind, and wellness in the body.

Many distinguished guests and devotees thronged the venue and got benefitted by the divine nectar all throughout nine days. The logical and spiritual Katha was accentuated by the soulful music in the form of Bhajans which mesmerized the audience. People were touched and moved by the depth and breadth of activities done by the organization in the form of selfless volunteers. Katha achieved the divine purpose to acquaint the masses and the classes of the society and shown them the real purpose of life.

Guru Puja Resonated with Gratitude and Prayers at Nurmahal, Punjab 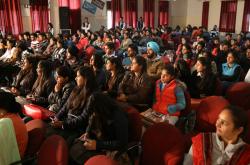 DJJS Plugged in the Youth of Apeejay Institute, Jalandhar Spiritually and Inspired them to Awaken the Nation's Esteem