Terrorist attacks and upsurge of violence have become the escalating threats in both developed as well as developing nations.  Not only it destroys the human population, but reveals a ravaging effect on non-living organisms.  To prevent and counter such violent extremism, Sarva Dharma Samvaad  and Indialogue Foundation jointly organized the Annual Interfaith Iftar Dinner Program on Saturday, 2nd  July, 2016 at The Royal Plaza Hotel, New Delhi. Among the various spiritual dignitaries along with social activists, senior journalists and scholarly ambassadors of various faiths, representative of Divya Jyoti Jagrati Sansthan (DJJS) was also invited as a Guest Speaker to address the august gathering. Complying with the event’s theme- ‘Role of Religions in Countering Violence’, the daughter disciple of His Holiness Shri Ashutosh Maharaj Ji profoundly emphasized the two important concepts of Religion i.e. Hardware Religion and Software Religion. The former constitutes the ritualistic and scriptural teachings, whereas the latter indicates the practical aspect i.e. Realization of the TRUE-SELF or Atman. And, in the Software part of religion lies the formula of TRANSFORMATION, the master-key to combat VIOLENT EXTREMISM prevailing within and without. She concluded- ‘In the vicinity of Pure Consciousness, all the hostile tendencies are eliminated leading to harmony, coherence, and orderliness.’

All the participants were highly convinced and appreciated the organization's core philosophy- FROM SELF-AWAKENING TO GLOBAL PEACE! 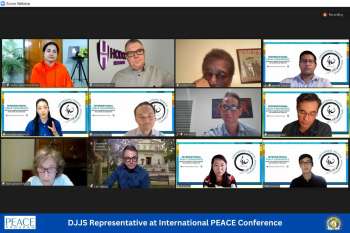