To commemorate the memory of Bharat Ratna Dr. APJ Abdul Kalam, Muslim Rashtriya Manch, affiliated to the Hindu nationalist Rashtriya Swayamsevak Sangh (RSS), formed with the main aim to bring Hindu & Muslim communities close together in India; celebrated Students Day on the occasion of his 84th birth anniversary. Manthan SVK was invited to be a part of this event, which took place on 15th October 2015 at the Speaker Hall, Constitutional Club, New Delhi. The program commenced with prayers followed by an introductory speech of Sadhvi Deepa Bharti, representative, DJJS and program coordinator Manthan-SVK.  While briefing the audience about the Manthan SVK initiative, she expressed the present deprived conditions of children living in slums and remote India and how Manthan SVK is working for the bridging the education gap and developing the core educational foundation of thousands of unprivileged children residing in these areas. The speech was followed by a small patriotic skit by the student beneficiaries of Manthan SVK – Shakurpur,New delhi, where they portrayed various Indian heroes who have lived and died working for the nation. A special ode was paid to Dr. Abdul Kalam in the skit by enacting few of his famous ideals. The skit was a hit among the audience and was followed by an enthralling dance performance by the students of Manthan SVK – Badli, new delhi.

The students of Manthan SVK-Badli gave a glimpse into the life of Indian soldiers through their energetic dance performance on the song Kandhon se milte hain kandhe…. The performance was infused with enthusiasm and was enjoyed by the school and college students, teachers, principals , deans and eminent guests present on the occasion. They supported the children throughout with their claps and cheers.

The chief guest of the event was Mr. Indresh Kumar, senior RSS Pracharak & Margdarshak, Muslim Rashtriya Manch was enthralled by witnessing the children performing with full zeal, confidence and enthusiasm. In his remarkable speech, he beautifully expressed the greatness of Dr Kalam. He spoke on how the essence of true spirituality is the paramount foundation of a human being and how the world can become a pleasant and blessed place to live in if everyone revives their roots.

The chief guest Mr. Indresh Kumar personally met the Manthan SVK students at the end of the program and congratulated the teachers for the wonderful thought and effort put into the upbringing of the students. 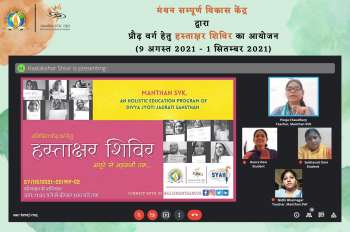