Relevance and Practical Application of Gita Astonished Many Enthusiasts
All Categories

Relevance and Practical Application of Gita Astonished Many Enthusiasts

It is said that some things always remain relevant and important irrespective of the era like Universal Truth. Shrimad Gita is one such epitome of being relevant at all the times. To explain its importance and relevance to the masses, Divya Jyoti Jagrati Sansthan (DJJS) organized an event named ‘Gita Jayanti Mahotsav’. The event was held at Chaudhary Devi Lal University, Multi Purpose Hall, Sirsa, Haryana on Dec. 20, 2015.  It was organized by Sirsa Branch. Bhagwad Gita shows path to the lost, answer to the confused and wisdom to all. It is considered to be one of the greatest spiritual books the world has ever known. The primary purpose of the Bhagwad Gita is to illuminate for all of humanity the realization of the true nature of divinity; for the highest spiritual conception and the greatest material perfection is to attain love of God. This divine purpose was orated in simple yet effective way. A quiz session and interactive activities were some of the tools used to convey the message of practical Spirituality. The talk also involved youth interaction, who participated in the interactive session and thought provoking activities based on Gita.

It is also the popular belief that Gita is too complex and philosophical to practice rather it is beyond practicality. That’s where the orator provided a terse solution in the form of ‘Brahm Gyan’ which provided the road to self-realization for humanity. Once divinity is practically realized, then the verses of Gita can be easily understood and practiced. Theoretical and philosophical verses become a reality then. More you tread on the path of meditation and self-realization, Gita as a spiritual guide and mentor, poses different facets of life and help to create a balanced life.

The program was enjoyed thoroughly and people vouched to imbibe its teachings. 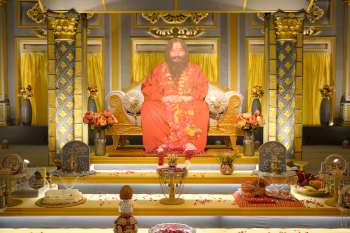