Shri Ram Kathamrit Guiding the Audience towards Righteousness at Hoshiarpur, Punjab
All Categories

Commencing with the grand Kalash Yatra that preceded on September 13th, the pious Ram Kathamrit held in Roshan Ground, Hoshiarpur, Punjab was a true guide for the common conflicted man. Hosting the event, Divya Jyoti Jagrati Sansthan, welcomed the audience of all creeds and backgrounds very humbly. Katha Orator, Sadhvi Shreya Bharti Ji, disciple of His Holiness Ashutosh Maharaj Ji, took the audience from the present day to the Treta Yuga where Lord Rama incarnated. From September 14th to 20th, the audience re-visited, re-called, as well as re-learned the various lessons Lord Rama incarnated for. With the benign guidance of His Holiness, events as such continue to be a huge success wherein the audiences gain valuable knowledge, secrets throughout the Holy Scriptures, as well as the assurance to the hidden practicality behind each verse of these texts. Sadhvi Ji laid out the fundamental teachings along with the deep meanings behind all of Lord Ram’s actions. Sadhvi Ji explained that the reason man is in conflict is due to encroachment of one’s dignity. Lord Rama is known as “Maryada Purushottam”, meaning the one who abided by all laws and expressed the right conduct.  In order to gain the lost peace and tranquility of mind, man must live a dignifying life of high morals. Lord Rama showed mankind the right way and His Katha certainly gives the right guidance to conduct the right actions.

Accompanying the symphonical hymns, the oration of the Katha touched the parched hearts ushering out the nectars of divine love. Various audience members were seen singing along, clapping, as well as swaying with the music. Laughter and tears followed all emotion triggering descriptions. Sadhvi Ji had everyone on the edge of their seats with the elaborative insights into Lord’s divine plays.

Youth Wing of Divya Jyoti Jagrati Sansthan; it is through this initiative that youngsters are able to gain valuable guidance and support to tackle obstacles they may face. Youth is seen working selflessly in this wing hosting programs as this one. All volunteers seen at the event are not working for any sort of pay, instead they devote their time and energy towards the grandiose goal of World Peace set by His Holiness. They are determined individuals who are working tirelessly to establish Ram Rajya, the righteous kingdom of Lord Ram, once again on the Earth. 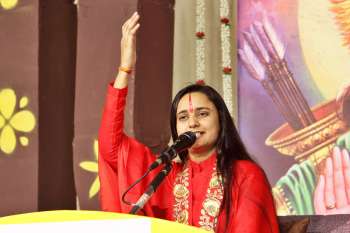 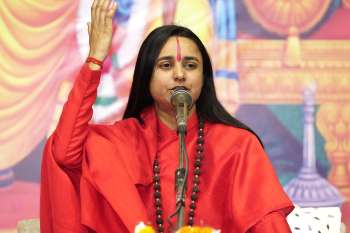