Yet another insightful oration of Shrimad Bhagwat Katha was imparted through Divya Jyoti Jagrati Sansthan with the compassionate guidance of His Holiness Shri Ashutosh Maharaj Ji. Under His kindling teachings, the organization held the event in Jaitpur, Delhi from 20 Nov to 26 Nov 2016. Sadhvi Padamhasta Bharti Ji graciously orated the Katha unveiling the spiritual meanings behind the incarnation of Lord Krishna. The masses of the region gained in-depth knowledge of Lord’s leelas. Sadhvi Ji also took the opportunity to address the misconceptions the society holds against Lord Krishna and clarified the grand motive behind his divine plays. Sadhvi Ji stated that any action of the Lord was meant to guide the people of the Dwapara Yuga into the right direction. Lord Krishna himself proclaims that whenever humanity will be lost, I will incarnate to establish the dharma – the eternal path to moksha.

The Katha served as a reminder why Lord took birth on the earth and the importance of His works. During the Katha, specific verses from the spiritual texts were cited in order for all to acknowledge the necessity of Lord’s avatar onto the earth. As the times call for Him, He continues to incarnate and reunite the discouraged faiths by providing direct God perception to one and all. The significance of Lord Krishna’s plays still holds firm, even eras later, through His teachings in the form of Bhagwat Gita. Highlighting the works of the organization, Sadhvi Ji stated that the fundamental driving machine behind all selfless services the organization provides is the practice of Brahm Gyan imparted by His Holiness Shri Ashutosh Maharaj Ji. Brahm Gyan is the technique through which one perceives the direct experience of the Lord Himself. As the candle burns and illumines the darkest of the rooms, Brahm Gyan is such a guiding torch that rids all darkness of ignorance. With the practice of this technique one is able to truly understand the divine revelations Lord plays during His incarnations on the earth.

Katha was complemented with beautiful compositions of vedic verses, bhajans, spiritual hymns, and enlightening musical songs that captivated the audiences’ mind. The attendees found themselves lost in the glory of the Lord through these inspirational harmonies and felt being rescued from the whims and fancies of the recent deprecating thinking. 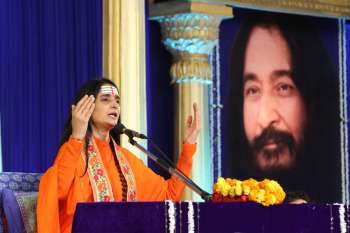