Sadhvi Shreya Bharti Ji through a moving recital of the Kishkindha Kanda posited that no one except an enlightened being like Shri Ram can uphold the code of friendship even in situations of distress. For instance, Shri Ram helped Sugriva against Vali’s (Sugriva’s brother) onslaught by killing the latter. In the process, Shri Ram took the blame of using deception for all ages to come. Shri Ram who throughout his life never used deception to gain an upper hand over his own enemies did so for his friend Sugriva. However, here it must be noted that Shri Ram didn’t aid Sugriva merely because he was his friend. Shri Ram killed Vali for the latter erred from the path of righteousness. Vali had begun to use his power to trouble those weaker than him. He also took his brother’s (Sugriva) wife as his wife. Shri Ram then had to kill Vali for he refused to change his sinful ways of living.

Sadhvi Ji said that these actions of Shri Ram suggest that under all circumstances one can hold on to a virtuous life. However, asserted Sadhvi Ji, this can’t be achieved without the presence of an inner guiding force. Shri Ram, as stated above, was an enlightened human. He gained eternal knowledge from his spiritual Master Sage Vasistha. It is well known that Shri Ram was the human incarnation of Lord Vishnu, yet he as a human adhered to the teachings of his spiritual master. Sage Vasistha bestowed upon Shri Ram the ever-lasting knowledge of the universal consciousness known as Brahm Gyan. Armed with this knowledge, Shri Ram was able to overcome all the testing situations of life on earth. 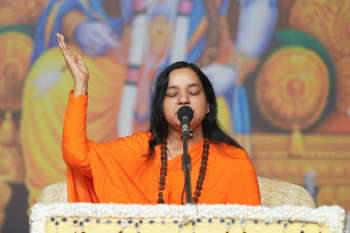 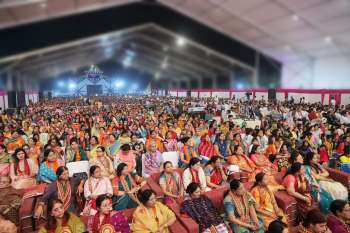