MAA DURGA is a ferocious form of Devi- the All-Powerful Almighty Mother Goddess. Once upon a time, the Gods could not defeat the buffalo demon Mahishasur, who was threatening the existence of the universe; the Gods were afraid of this water-buffalo bull as neither Vishnu nor Shiva could prevail against him. They pleaded lord Shiva for his assistance, and Shiva advised all the Gods to release their power, as the joint energy of their power (Shakti) was only capable of vanquishing Mahishasur. The great powers of the Gods conjoined and emerged into a prodigious form, and from which arose the splendid Goddess with many arms. She was as beautiful as she was lethal and it was this ten-armed Goddess who went out to battle against the powerful demons. The Gods named her DURGA- the Invincible One. 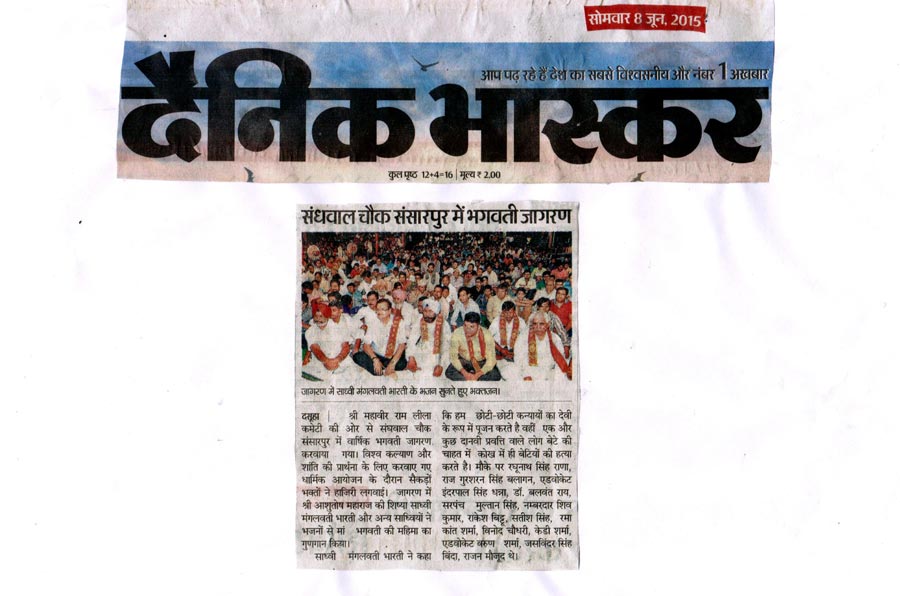 Each one of us also has Durga Maa inside our soul, the rage like her, the power like her but before realizing that power inside us, we also need to join our energy and capability so that we can fight better against all evils and demons like Mahishasur. In order to empower us with the new spirit and zeal to conquer the negativity of this world, Divya Jyoti Jagrati Sansthan (DJJS) - a non-profit and spiritual organization under the supreme guidance of His Holiness Shri Ashutosh Maharaj Ji, organized the splendid program of Maa Bhagwati Jagran at Hoshiarpur, Punjab on June 9, 2015.

The program left its mark on Punjab as numerous people came together under one blissful umbrella to get illuminated with the divine words and the devotional bhajans, perfectly sung by the DJJS team. Sadhvi Ji laid emphasis on the problem of duality that exists amongst people, although they enthusiastically participate in Durga pooja, Maa Kaali pooja, Saraswati pooja, and never forget to worship Laxmi maa on Diwali, yet they become reason for incidents like –female foeticide. It’s high time to change the mind-set and get connected with Maa Durga inside one’s soul through the Divine Knowledge of “Brahm Gyan”.