The assemblies are organized on “Issues in Environmental Hygiene & Health”, mainly covered on awareness about cleanliness, hygiene, sanitation and the various diseases that are caused due to poor hygienic conditions. The teachers initiated the discussion and emphasized upon the importance of cleanliness and sanitation as well as its implementation in the daily lives. They stated that it is very essential to follow certain good practices like keeping our surroundings clean, avoiding littering in public places, refraining from spitting on the road etc. teachers’ delivered the lecture on “Waste Management and Environmental Health”. They also stated that the ecosystem contamination and degradation have resulted in the loss of benefits to human society and affected the quality of life of all living organisms. The discussion was concluded by stating that the negative trend of losing biodiversity can be reversed through conservation of natural ecosystems and ecological restoration of degraded lands. Various cleanliness and hygienic aspects were discussed in the morning assembly also. Teachers’ highlighted the vision of Hon’ble Prime Minister of India about Swatch Bharat Mission.

The workshops were also conducted on the reuse and recycle of the waste material. Mass awareness was generated on cleanliness and hygiene not only amongst students and staff members by holding regular ‘Sensitization Programs’ on ‘Swatch Bharat Abhiyan’ but also rallies were conducted to sensitize the society. In the scorching heat of 2nd October 2018 hundreds of young and enthusiastic students of Manthan SVKs in Delhi, Haryana, Punjab and Bihar marched a rally in their nearby areas and their societies. With a mission to clean the streets and to teach through their act to the society by keeping the statement of Mahatama Gandhi Ji ''Be the change you want to see'' The awareness marches also witnessed signature campaigns by the onlookers and passerby’s pledging to Make India, a Clean India. People in large numbers came forward, signed and pledged for the cause. After the rally preachers and volunteers from DJJS distributed bananas to Manthanites and discussed about the importance of hygiene cleanliness.

At the end would like to get into your notice that the people at various places stated that it's a wonderful job which should be carried on further as well and this will change the mind set of people and this society. Children also spread awareness through theme based insightful street plays and video presentations.

Further, the awareness programs like Slogan competition, essay writing, poetry writing/ reciting, speeches, skits, display of Sign Boards in the surrounding areas are on the anvil to sustain the initiative of Cleanliness. The students and staff members took voluntary oath to maintain cleanliness of the campus and its surrounding areas on regular basis. The school campus was cleaned by the students, the cleaning of polythene bags, collecting dirty materials and the wastage was dispersed in to the dumping yard.

The campaign is nonetheless bringing behavioral changes in the people and motivating healthy living practices, spreading cleanliness awareness among people, strengthening the cleanliness systems in the urban and rural areas as well as creating user friendly environment for all private sectors interested for investing in India for cleanliness maintenance.

As a final note our young Manthanities left a mark in many people's heart, if they can do it then the others can also step ahead and make a difference in the society. 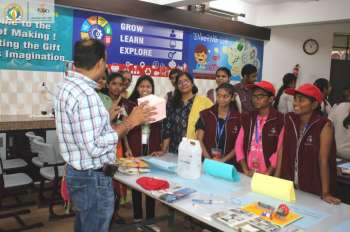