As per Hindu calendar, on the full moon day of the month of Magh, the birthday of Shri Guru Ravidas Ji is celebrated as Guru Ravidas Jayanti across India. To commemorate the same, under the auspicious patronage and torch-bearing leadership of His Holiness Shri Ashutosh Maharaj Ji, Divya Jyoti Jagrati Sansthan (DJJS) organized a magnificent spiritual program at Guru Ravidas Mandir, Basti Nau Jalandhar, Punjab from February 8th to 9th, 2020. DJJS representative Sadhvi Saumya Bharti, the orator of the grand devotional event blissfully elucidated the essence of the life transforming writings of Shri Guru Ravidas Ji. The sacred hymns from Guru Granth Sahib and other devotional songs sung by the musician disciples spiritually enthralled the huge assemblage of devotees. DJJS representative ardently narrated that Guru Ravidas Ji was a great theosophist, thinker, saint and a humanist who spread the message of divine wisdom, universal brotherhood and tolerance through his teachings. The magnificence of Shri Guru Ravidas Ji can be found in the devotional songs and verses that made a significant impact on the Bhakti movement during that era.

As the legendary master of Meera Bai and others, Guru Ravidas Ji imparted the supreme truths of devotion and Karma to each and every soul who came into his divine refuge. Sadhvi Ji ardently decoded the sacred symbolism behind the philosophy propounded by Guru Ravidas through the Bhakti movement.  He advocated that running after the sense-objects at the cost of true knowledge culminates into ego and voracity for more. To liberate oneself from the misapprehensions of life and death, knowledge of 'Brahm Gyan' or supreme knowledge is the only cure. Spiritual knowledge ushers soulful introspection and eradicates all the delusions of mind. In order to overpower the waves of the wandering mind, one is required to experience the divine truth which one acquires after getting blessed with a Divine eye by a mystique visionary or perfect master. Guru Ravidas Ji in his teachings mentions about a mystical state where there is a union of self with the supreme one.

Sadhvi Saumya Bharti Ji concluded that true worship is a spiritual discipline aimed at concentrating the mind on the supreme. Through the divine knowledge of self one can merge in the divine being and experience the bliss of one's true self.  The absolute technique of Meditation is the perfect tool to tap the spiritual aura of the universe attained through the opening of the divine eye. Shri Ashutosh Maharaj Ji is one such divine personality who has taught millions of devotees across the globe the essence of spiritual science and meditation. The ancient science of blissful 'Brahm Gyan' is the ultimate path to individual, societal uplift and to enrich the spiritual, social and moral values in the masses. Self-realization awakens noble virtues and instills true joy, gratitude, forgiveness, and compassion. 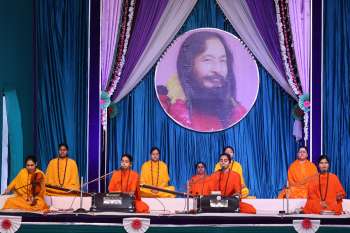 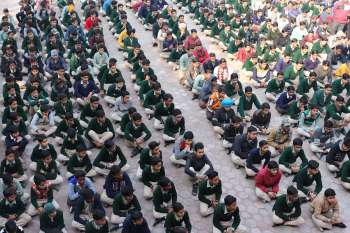