As you are aware, DJVM recently completed their Vedic Sangoshthi series in Dakshina Bharata (Karnataka), this news spread like wildfire. Its effect was so grand that DJVM received a call from the world’s richest temple, Padmanabha Swamy Temple for an upcoming Ananthapuri Veda Sammelanam 2023.

In accordance with this, Divya Jyoti Ved Mandir was invited to Ananthapuri Veda Sammelanam 2023 in Thiruvananthapuram, Kerala. This Regional Conference on Vedas was organised by Maharshi Sandipani Rashtriya Veda Vidya Pratishthan, Ujjain (under Ministry of Education, Govt. of India) in collaboration with People for Dharma Trust from 5 January to 8 January, 2023. The very next morning, in the Brahma Muhurutam DJVM Ved Pathi-s did group meditation and then following the traditions of the temple, they did “veda japam” with the mantras of Shukla Yajurvediya Rudrashtadhyayi, Madhyandina Shakha right in front of garbha gṛha of Padmanabha Swamy, where Lord Vishnu is resting on ananta nāga in ananta śayanaṃ mudrā. The entire garbha gṛha resonated with Vedic Mantras as DJVM and Ved Pathi-s from different branches of Vedic tradition chanted the divine hymns. After this, everyone in a procession did a peace march from temple to the program venue chanting the vedic hymns Vedi-fying the entire surrounding. Along with this, the Sammelanam saw the presence of numerous speakers on varied topics like Veda Chanting Practices in Bharat, Influence of Samaveda in Sopana Sangeetham, Mahatmya of Namasankeerthanam in Vedas, Hasta Mudras in Veda, Significance of Vedic Technologies in Contemporary World etc. The representatives of DJVM interacted with eminent guests, Vedic scholars, students of gurukuls on varied topics relevant to the research in various branches of Vedas.

On 7th January, Sadhvi Deepa Bharti Ji, Global Program Coordinator with her eloquent words of wisdom in Sanskrit, Hindi and English language gave a formal introduction of DJVM and Divya Guru Shri Ashutosh Maharaj Ji and delivered his divine vision to everyone. After this, the BrahmGyani Ved Pathi-s started the chanting of Shukla Yajurvediya Rudrashtadhyayi, Madhyandina Shakha rendition. The chanting, the coordination and the rendition of Vedic Mantras by DJVM’s BrahmGyani Ved Pathi-s with such precision and accuracy received a grand applause from everyone present. The representatives of DJVM were presented with a momento and a token of regard.

The event was formally closed on 8th January where Divya Jyoti Ved Mandir was presented with a certificate of appreciation as received by Swami Pradeepanand Ji, Coordinator, DJJS Chennai. 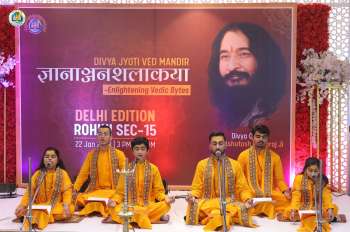 Alankrita: A virtual workshop by DJVM that devises children into a vedic genius! Here, there and everywhere: DJVM expands its horizons to Dakshina Bharata