Every Human Being is in a quest for mental peace today failing to realize that the constant flow of anything can be derived only when connected to the source of it. So the solutions which are derived from temporary things will also be ephemeral in nature. The only constant and everlasting truth is divine name of “The Supreme” and therefore is the source of all Positivity, Strength and Peace on this earth. Unless we connect to this source by first experiencing ‘God’ within ourselves, such goals cannot be achieved on lasting basis. Divya Jyoti Jagrati Sansthan in order to bring about such awakening and inspire devotees to make most of this golden chance organized a soulful devotional concert “Divya Naad” on 28th October, 2018 at Zirakpur in Chandigarh, Punjab. Under the divine guidance and inspiration from His Holiness Ashutosh Maharaj Ji, soulful lyrics were composed and delivered to the melodious tunes which elicited spiritual values and devotion amongst attendees. Sadhvi Jayanti Bharti Ji, the preacher disciple for the program, enlightened devotees on the music of our inner world i.e. the music of divine that’s ever reverberating within us known as “Anhad Naad”. It can be heard when a Perfect Master bestows seeker with the Divine Knowledge or Brahm Gyan which opens the third eye within thereby opening gates to Supreme Glance. Such Ulterior music is the music of Supreme itself. Our sages of ancient times proclaimed in Vedas based on their direct perception and experience that this whole universe also came into existence through the “Aadi Naam”or primordial vibration, “Anhad Naad” of Supreme. The whole universe remains connected at by these vibrations at all time. This is the single most unifying force among all living and nonliving beings. Connecting to this vibration will tarnish the mental differences or duality and in true sense establish “The World is One Family” prodigy. She explicitly claimed that the Divine knowledge of experiencing God is not an ordinary phenomenon and only a few becomes the part of it in every era.

The program was marked as colossal success since thousands of people marked their valuable presence and listened to the divine call of world peace. Many eminent guests were also involved and were overwhelmed with the flow and contents of program. Following were some of the renowned names: 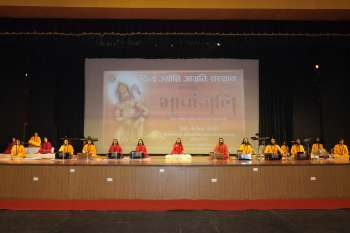 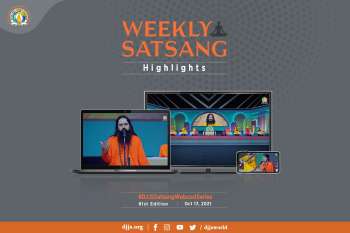