Divya Jyoti Jagrati Sansthan observed Earth Hour on 25th March 2017 across its 350 centres to raise awareness among people about the menacing climate change. The rising pollution, declining forest cover and inconsiderate attitude of humans over the years have caused the climate to change. Earth Hour is an initiative of WWF to combat this climate change by engaging people into the pro-environmental act of switching off the unnecessary lights of their homes and offices, and encouraging them to contribute in restoring the state of environment. 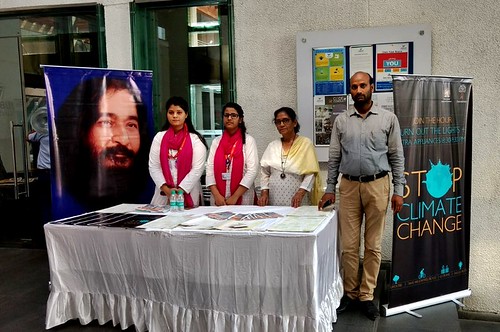 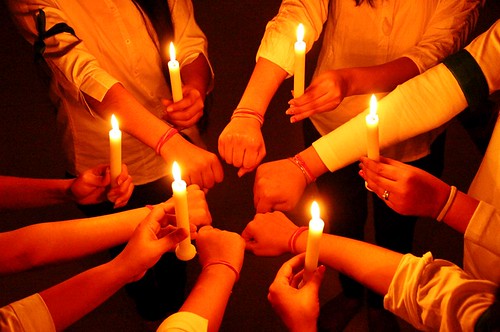 The Nature Conservation program of the sansthan "Sanrakshan" went 60+ on Earth Hour, for it did not only observe the Earth Hour on the defined date, but started creating awareness among people, of all age groups, income groups and social groups, days before the day of Earth Hour. The volunteers set up the awareness desks in MNCs and corporate to aware employees about the issue, motivate them to observe the hour and pass on the message to their family and friends. Earth Hour posters, specially designed by the sansthan, were also distributed to the employees through these desks so that they can put them in their colonies, at public places and private institutions to aware public at large. Besides this, the volunteers of the sansthan handed over a memorandum to the company chiefs urging them to observe Earth hour at their home and workplace. At DJJS premises, the Earth Hour was observed in a unique way. In the beginning, the attendees were apprised of their social and moral responsibilities towards the Earth. The disciple preachers and volunteers of sansthan explained people about their innate bond with the nature and the fact that they must act responsibly to ensure the survival of present as well as future generations. Post that, all the lights were switched off and an hour-long "Meditation for Earth" session was organized. "Meditation for Earth" is a unique effort of the sansthan towards rejuvenating Mother Earth with spiritual vibes and positivity. DJJS transformed this hour of no action to an hour of introspection. Lakhs of disciples of H.H. Shri Ashutosh Maharaj ji, the Head & Founder of DJJS, across the globe dedicated this hour to Mother Earth and showed their commitment to stand against climate change. Like every year, DJJS ensures that this hour, which receives limited attention and understanding from people is made an hour of pro-environmental action.

The branch created awareness among masses about climate change and the significance of observing Earth hour through various media. From handing over memorandum to various renowned people of the area, to conducting rallies (candle march) at places with high footfall and holding full-fledged awareness sessions for the people, the branch left no stone unturned in spreading the message. During this sensitization drive, various institutes and centers, including Gitanjali Jewellers, Heera Sweets, Hotel Surya; Oriental Bank of Commerce; South Indian Bank, etc., were contacted and apprised of the issue.

The volunteers of DJJS Ludhiana took the message of the need to observe Earth Hour to various eminent people and institutions. They handed over memorandum to the people and appealed to mark their support for the cause. A candle march was also organized at Ambedkar nagar and Kipps market to sensitize masses about climate change and the importance of Earth hour. Moreover, meetings were conducted with the volunteers few days prior to the designated day to acquaint them with the activities planned for Earth Hour and for proper execution of it.

DJJS Ahmedabad marked its support for Earth Hour by organizing varied activities in the area. The branch created awareness among people at Sankalp Residency, Vavol, Gandhinagar about the fading human-nature relationship, result of which is increased changes in the climate. People were explained the significance of Earth hour as a measure to combat this problem. Moreover, the branch handed over memorandum for observing Earth hour to few eminent people of the area and apprised them of the cause. Besides this, a meditation session was organized at sansthan's premises at Sharda Krupa Society, Jantanagar, Chandkheda, wherein the disciples of Shri Ashutosh Maharaj ji meditated for an hour switching off all the lights to spiritually re-energize Mother Earth.

DJJS Jalandhar observed Earth Hour in a spiritual way at PAP Shiv Mandir. In the beginning, people were made aware of climate change being the biggest threat to humanity today and in the centuries to come, considering the current lifestyle patterns. Later on, the dedicated disciples of H.H. Shri Ashutosh Maharaj ji discussed what Earth hour is and how it is practiced all over the world as a countermeasure for climate change. Post that, the branch organized an hour-long meditation session to re-energize and rejuvenate Earth with spiritual vibes. In the end, the volunteers encouraged people to take a pledge of serving their planet in whatever way they can.

DJJS Patel Nagar set up an awareness desk at Jubilant Co., Noida to create awareness among people about Earth Hour. The increasing air pollution and deforestation have caused some changes in environment that are irreversible or may take years to be restored. The volunteers of DJJS explained people about climate change, which is a very critical issue society is facing today, but hardly receives any attention. They encouraged people to contribute their bit in saving the planet by switching off all the unnecessary lights of their home and workplace during the Earth hour. DJJS Bareilly centre all set to bridge the knowledge gap; undertakes environment awareness in the district