According to the Gregorian calendar, when the night is dark, people are sleeping, in absence of any activity, the day changes while according to Bhartiya Samvat, with the sun rise, when beautiful sun rays fall on Earth, new day starts just the way the world welcomes the new day on the sunrise. Which one is better? The decision is obvious. The Hindu calendar is based on both Sun and Moon, which makes it a Lunisolar calendar, very much accurate in all calculations. It is the outcome of our highly intellectual sages. It is indeed a proud to call oneself as Indian. In order to make people aware about the Indian culture, its traditions, and scientific logics behind it, Divya Jyoti Jagrati Sansthan (DJJS) - a non- profit, non-government and a leading spiritual organization, head and founded by His Holiness Shri Ashutosh Maharaj Ji, celebrated a program of Spiritual Congregation in its various branches such as Dehradun, Amravati, Bangalore, Chakan, Dabwali Malko Ki (DMK), Ghaziabad, Jaipur and in Jalandhar on the theme- “Abhinandan” on April 2016.

The program commenced with extending warm welcome to all guests, congregators and volunteers. The beginning holy prayer at the lotus feet of revered Gurudev and Maa Bharti marked the wonderful beginning of the program. The series of devotional bhajans and meaningful songs, tuned with melodious rhythm and inspiring words just enlightened the audience with the divinity of the program. “India is the cradle of Human race, the birth place of human speech, the mother of history, the grandmother of legend, the great grandmother of tradition. Our most valuable and constructive materials in the history of man are treasured up in India only.” – Mark Twain

The spiritual discourser of the program very beautifully explained how most of the important things first discovered in India and then followed by the whole world. The theme: ‘Abhinandan’- symbolizes the welcome of new dawn which marked the rise of Indian culture and aspires to bind each one in one culture, one tradition, one family with one goal.

Audience came to know about the importance of Indian land and its highly scientific culture which always inspires each one to follow our own motherland and its traditions. The culture represents its country and when the culture is sincerely followed, then that country can maintain its special place on the world stage. And this world has always praised our nation which is the legend on this Earth. 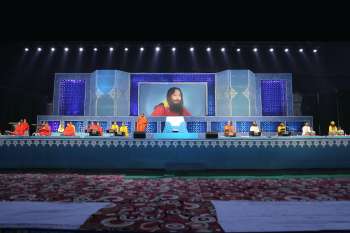