Marking the 5th anniversary of the Gurugram centre of Manthan Sampoorna Vikas Kendra, we held our Annual Day at GIA house, Gurugram on the 9th of April, 2017. The event was decorated with numerous reasons of celebration, the most important one being the award distribution of students from all our centres across Delhi and NCR. The event was also dedicated to the Indian New Year Vikrami Samvat 2074 starting from 28th of March, 2017. Manthanites portrayed their proficiency in speaking Sanskrit through a skit titled 'Shiv Ka Dhunush Kisne Toda’. The Humor oriented play was followed by dance performances by the students of Manthan titled 'Bachhe Mann Ke Sachhe’ and 'Padhoge Likhoge Toh Hoge Nawab’. The young talented performers stunned the audience with their dance and confidence.

Another important part of the Annual Day was the launch of our very own Jingle of Manthan titled 'Padhke Dikhayenge, Badhte Hi Jayenge’ as the whole auditorium gazed at the Manthanites swaying to the music of their jingle.

The students of Manthan depicted the importance of Value Education through their dance 'Sa Vidya Ya Vimuktaya’ and gave a group song performance titled 'Mahishasur Mardini'.

The function witnessed the formal inauguration of our Adult Literacy Centre at Gurugram, an educational effort for the illiterate women and mothers, with the help and support of the Rotaract Club of Shri Guru Gobind Singh College of Commerce.

We also inaugurated ‘Prashikshan’ Sewing and Stitching Centre at Gurugram, an effort put in by Manthan for providing vocational training and self employment opportunities for women. This too, was done with the support of Rotaractors.

The event was also marked by the launch of Ms. Uma Narayan’s Life Skills book that she has designed for the Manthanites. Her words motivated us all and the importance of life skills in schools was conveyed.

Beside all the performances and award winning children on the stage, an exhibition portraying the creativity and artistic skills of the Manthanites was also put up outside, along with a Photo Booth wherein the Sponsors could get themselves clicked with their sponsored children.

The end of the event was marked by a dance 'Gunj Divya Jyoti Ki’ depicting the ideology of Divya Jyoti Jagriti Sansthan and the initiatives undertaken by it.

All this was followed by a Sponsor Meet wherein the Manthan kids thanked their sponsors with handmade Thank You Cards.

It was our extreme honour to have with us Mountaineer and President Awardee, Ms. Sunita Choken, a youth icon and an election icon of Haryana. She has also won the BSF award and Nari Shakti award from 5 states of India. She is also the brand ambassador for Beti Her words of wisdom at the gathering inspired us all.

Words of inspiration and their experiences at Manthan surely motivated the gathering as well as the Manthanites. The event also welcomed many teachers and educationists from renowned schools too. 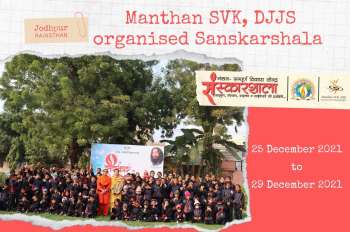