In this so called 21st century, the fate of a girl child continues to be questionable. Even the technology advancements and innovations operate against them in the form of sex selection and abortion techniques. Appalling skewness in sex ratio has become a matter of grave concern and has lead to rise in initiatives like ‘Beti Bachao, Beti Padhao’ by government and several others by various NGOs and institutions. DJJS Santulan, having an edge of spirituality, is working hand and foot to demystify myths & misconceptions and age-old beliefs basis religious doctrines; thus, create value and space for a girl child. Under its ongoing campaign, namely Kanya Bachao Abhiyaan, a mass sensitizing and awareness raising bike rally was organized against the deep rooted social menace in Indian ethos, on February 3, 2018, setting forth from Dhillon Ground, Opp. Mohindra College, Patiala. Sadhvi Manendra Bharti ji, Swami Vishwanand ji and Swami Gyaneshanand ji, on behalf of DJJS, welcomed the respected dignitaries. The programme began with an introductory note by Santulan volunteer briefing the event ingredients, followed by presentation of Kanya Bachao participation memento to the honorable guests, and token of appreciation by chief guest to the shortlisted women exemplars acclaiming their social contribution. An enthralling dance performance was presented at the programme site by group of volunteers displaying woman as incarnation of Shakti, howling “Bas ab aur nahi”. While addressing the huge gathering before embarking on the bike rally, Chief guest Smt. Preneet Kaur highlighted the stark and obvious result of female foeticide i.e. steep rise in crime against women. Mentioning few references from political fraternity, she emphasized that no sphere is left unexplored by women today. Commending Santulan’s endeavours in the regard of elimination of female feticide, she discussed that these social initiatives will help bring about an attitudinal change in favour of the girl child as the approach and ideology behind it is distinct. Further, she congratulated that it is imperative that youth is shouldering the cause. An exhibition adorned with educative posters and brief of Santulan initiatives in the field of women empowerment, was also arranged post program. Thereafter, with the release of balloons, the bike rally with 500 girls as participants was flagged off. The rally crossed various streets and lanes chanting aloud the slogans to save girl child and respect women. A quick demonstration of taekwondo and easy steps of self defence were presented by volunteers at an intersection, grabbing attention of hundreds. The bike rally itself was an exhibition of women empowerment and further sensitized thousands on its way in the direction of saving girl child and rise above discrimination and age-old prejudices & gender stereotypes. 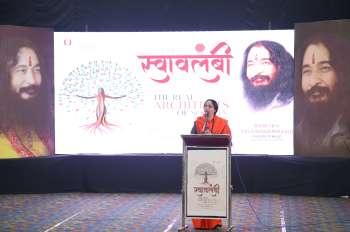