'Shiv Aaradhana – The Interminable Divine Experience' for the Masses of Ahmedabad, Gujarat

Lord Shiva is regarded as the God of transformation. It is transformation from darkness to light, ignorance to self-enlightenment, folly to wisdom and from bondage to salvation. Lord Shiva is known as the destroyer of evil. He did not tolerate injustice and destroyed the evil rakshasas in a befitting manner. Similarly, even we should try to keep zero tolerance for the evil happenings around us and take a stand against injustice. The orator, Sadhvi Richa Bharti Ji, disciple of Shri Ashutosh Maharaj Ji (Head & Founder – DJJS) explained that lord Shiva, one among the trinity, most powerful, robust and the one who stands for the right even in extremely odd conditions. His uniqueness makes him the icon and the ideal for many. The entire attire of Lord Shiva has symbolic meaning and carries a deep spiritual message. The trishul of Lord Shiva symbolises control of mind, intellect and ego, allowing us to work better and never lose control. The body of Lord Shiva is smeared with cemetery-ashes to give indication on the philosophy of life and death whereas death is the ultimate reality of beginning of a new life. Through a number of devotional songs relating to Shiv Aaradhana, the event brought to the notice the audience the key elements of worshipping Shiv in an eloquent manner.

Lord Shiva teaches the art of meditation in the absolute form. In meditation, the functioning of the mind is standstill and all the thought processes cease.  In deep meditation or Samadhi, even the object of meditation is transformed into its formless essence, which is the quintessence of everything and everyone. Thus Shiva stands for letting go of everything in the world of forms. The path of Shiva is the path of ascetic yogi. Shiva, the eternal energy dwelling within each person, is the perpetual companion. His meditative posture is indicative of being connected to the Lord. His third eye indicates the inability of the two material eyes and the ability of the awakened third eye to experience the Lord Himself.

The learned Sadhvi Ji then explained to the audience the importance of seeking an Enlightened Spiritual Master who shines the inner core of an individual and the one capable of fulfilling the ultimate purpose of life. It is only through self-awakening one can comprehend one’s true self and experience interminable peace and joy. Shri Ashutosh Maharaj Ji is one such Spiritual Guide who can show that light to the spiritual seeker too. Hence, the doors of DJJS are open to all the devotees who wish to see the Brahm Gyan form of Lord Shiva.

The program received energetic response and gratitude by the guests and visitors. The masses of the region gained in-depth understanding of spirituality. 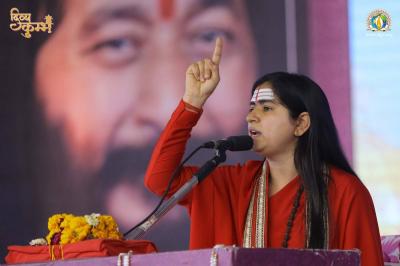 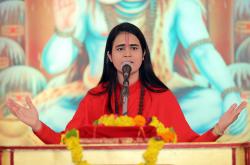