Lord Shiva is regarded as the exemplification of the Supreme Being. Shiva destroys and dissolves everything into nothingness but as Shankara, he also reproduces that which has been destroyed and dissolved. Shiva is the dissolving force in life. But Shiva dissolves in order to create, since death is the medium for rebirth into a new life. So the opposites of life and death and creation and destruction both are integral aspects of his   character. 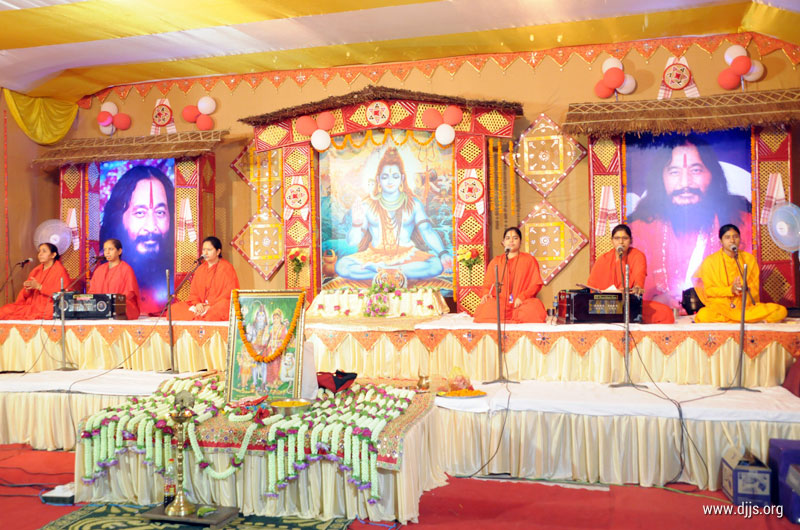 The series of charming devotional songs sung with words of wisdom immersed the people into the environment of devotion and filled divine feelings in them.

The orator, Sadhvi Deepankara Bharti Ji, disciple of Shri Ashutosh Maharaj Ji unfolded many divine secrets from the life of Lord Shiva. She stated that Lord Shiva is known as the God of mercy and kindness. He protects his devotees from all evil that are always around us. He blesses his followers with grace, knowledge and peace. The tranquil-looking Lord can turn into a destroyer, and can also be a Bholenath. He has multiple shades to his personality, and is one God who can truly teach us the wisdom to live life. Lord Shiva is known as the destroyer of evil. He could not tolerate injustice and destroyed the evil rakshasas in appropriate styles.  Similarly, even we should try to keep zero tolerance for the evil happenings around us and take a stand against injustice.

She further said, “Shiva” was called a ‘Maha Yogi’ because he meditated for hours for the well-being of the universe. His calm state of mind was disturbed only due to extreme reasons, but otherwise he would always be in a meditative state of mind. Establishing connection to Shiva within generates everlasting peace and happiness to and it acts as the deterrent to the agitations of the secular world.  His Third Eye indicates the inability of the two material eyes and the ability of the awakened Third Eye, to experience the Lord Himself.  Lord Shiva teaches the art of meditation in the most absolute form. In meditation, the negative traits of the mind are nullified to pave way for divinity and bliss.

It takes one to the realm of spirituality where there is infinite freedom from worldly bondages. The perfect masters, time and time again eulogize the correct and the divine meaning behind everything, and thereby show the correct path of spirituality and awaken the divinity within. The divine knowledge, through which, a man can reach the stage of immortality and experience true oneness with the Lord for eternity. Life is ephemeral and what happens today is not going to exist forever. The event certainly accomplished its motive of raising awareness of such a vital part of human life that is learning the real art of meditation i.e. “Divine Knowledge” through the Perfect Master of the time to practically experience and realize God. It is only through self-awakening one can comprehend one’s true self and experience interminable peace & joy.

The program received energetic gratitude by the guests and visitors. The masses of the region gained in-depth understanding of spirituality. The program was a huge success and left the gathering wanting for more.