Jalandhar: Divya Jyoti Jagrati Sansthan, founded and mentored by His Holiness, Ashutosh Maharaj ji, on the last Thursday, i.e. the 20th of this month, launched a statewide campaign to fight and prevent abuse of drugs and other substances under its social initiative, Bodh, Drug Abuse Eradication Program. In the campaign, Bodh unitedly brought together more than 2000 youth, men, women, children, eminent personalities from sports & arts, industrialists, politics and bureaucrats to raise their voice against the menace of drug abuse during the ‘Grand Walkathon’ being symbolically organized to mark the launch of yearlong campaign against drug abuse in Punjab. More than 20,000 people got benefitted by the awareness and prevention messages carried by various stakeholders facing direct or indirect adversities of drug abuse. 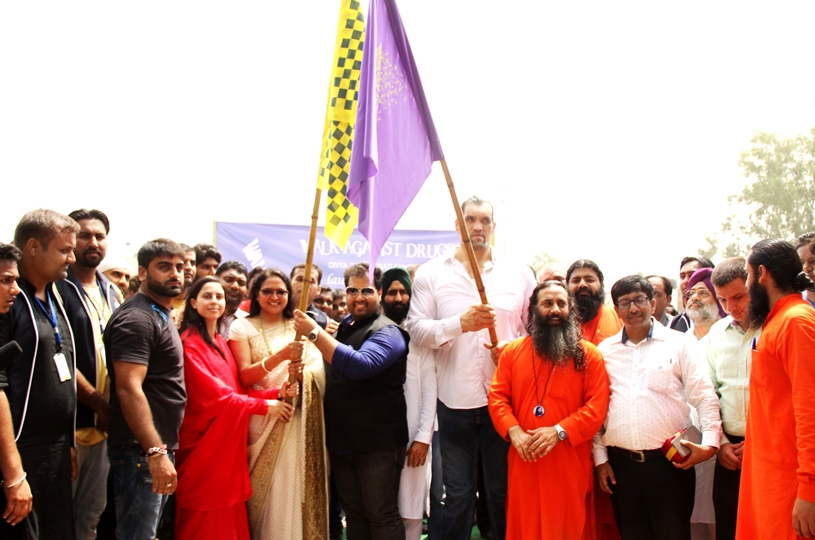 Various eminent Personalities of the city like Ms. Rashmi Mittal, Pro chancellor, Lovely Professional University, Punjab, The Great Khali, World Renowned Wrestler, Mr. Vipul Mehta,  Indian Idol Winner(6), Jagdish Gagneja ji, Chief Excecutive, RSS, Punjab , Mr. Ajay Sehgal, CEO Amritsar Cantt., “Yurinder singh Heir, Police Commissioner, Jalandhar, Mr. Raghunath Rana, Managing Director, Ranson Sports along with other intellectuals of the state solicited the Campaign’s Baloon releasing event carrying a deep symbolic  meaning of having to necessarily free one's life as well from the clutches of drug abuse. A unique poster of the campaign was also released by the panelists containing an impactful message, ‘Raise your voice with Unmoolan’ asking the population of Punjab to come forward for the most blazing issue of the state and support it to the fullest.

Commencing with a warm welcome of sensitive hearts to take charge of reestablishing a prosperous and drug free Punjab, the event began with a grand walkathon which was motivationally flagged off by the icon of the youth of Punjab, The Great Khali, Pro Chancellor of LPU, Ms. Rashmi Mittal,  Singing Sensation Vipul Mehta, and DJJS  Regional head Swami Parmanand ji, beginning  from Sai Dass School Ground covering heavy foot fall crossings like Patel Chowk, Basti Adda, Jyoti Chowk , Bhagat Singh Chowk and other areas . More than 1200 Youth between the age groups of 15 – 30 walked for the distance of almost 3 kms ahead holding pla cards with a strong message quoting outloud, ‘chodo nasha badlo dasha’.

The unique methodology of spirituality which can ignite the much needed will power in order for breaking the clasps of drug addiction, was the highlight that Sadhvi OmPrabha Bharti Ji, disciple, Ashutosh Maharaj Ji delivered during her speech. She too focused upon and shared various experiences and observations that the organization has had in the past 30 years. She also talked about how in the future course of action, the campaign will be spread in other cities and districts of  Punjab such as Amrtisar, Tarntarn, Moga, Batala, Phillaur, Bhatinda and Nawasehar. The organization plans to take up multifarious projects of awareness generation, prevention, counseling and treatment of drug abuse in the state throughout the course of ‘Unmoolan Campaign’.

The volunteers of Bodh, cladded in Dark Blue Jackets having ‘Bodh creating Drug free Society’ graphics engraved, with heads held high, shouldered the charge of being not only responsible citizens but they also reflected the iconic figures of change makers. The news of the event was thoroughly covered and broadcasted by various media houses like BBC, ZEE NEWS, ABP NEWS, P7 NEWS, PTC NEWS, SAHARA ONE, HULCHUL CHANNEL, FAST WAY, AZAD SOCH, GULISTAN that certainly shaped the launch of the campaign a mass movement, not only in Jalandhar but in the state of Punjab as a whole.

Unmoolan Campaign is a unique initiative aiming to create a drug free environment in Punjab where people are strong willed and resolute not to experiment with drugs based on the informed decision taken by themselves alone, not pushed or induced by anyone else from the society.

DJJS through its wide network of branches across the globe is working on nature conservation, bovine conservation, gender aspects, education, health, drug abuse eradication, disaster management and empowerment of prisoners and persons with disabilities.