Lord Shiva is an epitome of benevolence and bestows wisdom, inner peace, knowledge and tranquility. Lord Shiva is often referred to as Tryambaka Dev meaning ‘three-eyed Lord’. Lord Shiva symbolizes the qualities of a supreme soul mate, the ultimate consciousness and supreme cosmic spirit proficient and adroit in all possible ways. Our ancient scriptures acknowledge that Lord Shiva effectuates the role of creator, preserver, and destroyer of this mundane universe. Shiva is the cause of existence of every living being. To make people aware of this subtle omnipresence of Lord Shiva, a Devotional concert on the theme “Lord Shiva” was organized at Meerut, Uttar Pradesh on 5th August 2019 with the blessings of His Holiness Ashutosh Maharaj Ji (founder and head of DJJS). Sadhvi Lokesha Bharti Ji, preacher of DJJS, blissfully enlightened the colossal gathering of devotees with the theology of Lord Shiva. The preacher orator cited that as per the Hindu calendar, the holy month of ‘Sawan’ is considered auspicious as each of the seven Mondays during this tenure are celebrated as ‘Sawan Somvar’ across all temples with devotees offering Bael leaves, milk, holy water and flowers over the Shiva Linga. Lord Shiva is the supreme God or cosmic energy and the soul signifies Mother Parvati.  The actual worship of Lord Shiva begins the moment one experiences the knowledge of inner self through the age old science of ‘Brahm Gyan’. Only after attaining the ‘Divine Eye’ as possessed by Lord Shiva, one can transcend over the sensory planes. It is only via the eye of the soul, that we can attain wisdom and become spiritual in real terms. Shiva sitting in an open third eye meditating pose indicates serenity and elevated consciousness.

Sadhvi Ji proclaimed that the real quest for knowing Lord Shiva can be answered only by seeing the almighty inside. One should pursue and practice the divine technique of worshipping the Lord Shiva and search for such a ‘Mahayogi’ who can provide metaphysical knowledge of inner self. Shri Ashutosh Maharaj Ji is such a divine Yogi of the current times who bestows the supernal grace by imparting the cosmic knowledge of self-realization. Divinity realized inside is the only path to comprehend the divinity of Lord Shiva incarnated outside.

The event rejuvenated the devotees with the spirit of positivity and determination to seek for the perfect visionary of the present era and those who already have the blessings of such a revered master were invigorated and stimulated to be committed on the path of Brahm Gyan, nurturing humanity and spreading divinity. 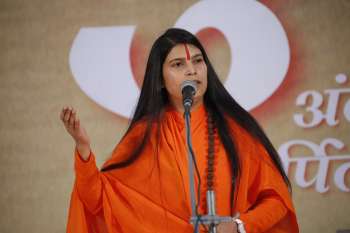