Sadhvi Jaya Bharti spoke at the IIMC auditorium about how in our country people have strived to know the ultimate truth of existence. This country has given preference to spiritual knowledge than material gains. People have always sought the refuge of enlightened seers and sages to experience the eternal truth and element of spirit. The seekers go places, ashrams, tirthas to find a Guru who can revel to them secret of life and the world. Kumbh Mela is the biggest such occasion that facilitates the interaction of enlightened sages and seekers.

Today, many who study and communicate about Kumbh have reduced it to mere bathing fair. Amplified in the age of multimedia communication the focus of this amazement stems from images of the vast tent city sprung up on the delta of the three rivers; the royal processions, of holy men and naked ascetics, first in line for bathing in the river on the most "auspicious" (holiest) days; and the densely packed pilgrims who press toward the riverbank by the millions. Vivid color photographs of these remarkable phenomena rocket around the world, creating the global image of an exotic spectacle. But the Kumbh Mela is far more than a media spectacle.

She explained that Shri Ashutosh Maharaj Ji, Head & Founder of Divya Jyoti Jagrati Sansthan has been tirelessly working to propagate the spiritual philosophy of Bharat that founds the basis of all Tirthas and spiritual congregation. Shri Ashutosh Maharaj Ji has explained that, “the Bhartiya civilization and social structure have always facilitated meeting and interaction between the enlightened sages and general masses seeking spiritual knowledge. In the same feet Kumbh melas were organized to bring the Brahamveta Tatvdarshi Sadgurus and spiritual seekers at one place, to take benefit of waters of sacred rives that were energized by energy vertexes forming due to planetary positions on certain days and directing one’s life towards ultimate objective of existence – the experience of higher consciousness.”

She also added that it is the responsibility of the media to communicate and spread the right concept and information about such significant events that are building blocks of India’s spiritual image and reputation.

The message of Sansthan was taken with great optimism by the students of IIMC and other members of media fraternity present at the event. The students we inquisitive to know more about spirituality and interacted with Sadhvi Jaya Bharti with their questions. 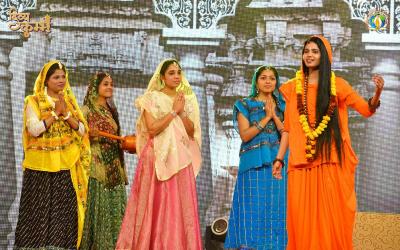