WHO focused ‘Diabetes’ as  global public health campaigns on ‘World health Day 2016’, annually marked on 7th April, by calling for action to Beat Diabetes through prevention and treatment of this disease. Divya Jyoti Jagarati Sansthan under its holistic health program ‘Aarogya’ observed ‘World Health Day 2016’ with a theme ‘Beat Diabetes through Ayurveda & Yoga’ to deal with diabetes brought forth a distinctive way comprising various yoga asanas, Pranayam and Ayurvedic medications as a panacea in beating diabetes, the most effective way. Under the initiative within weekend duration, various activities were organized like ‘Yoga & Ayurvedic Health Camps’, Awareness sessions & exhibitions on ‘Diabetes’ through various centres of DJJS in India. Keeping awareness on diabetes as the soul of each activity, we reached out to people at cities, villages, semi urban areas and clusters.

Diabetes is no longer a disease of the old people but globally every year more than 80,000 children under 15 years are estimated to develop type 1 diabetes; neither it remains a  disease of the elites but has gripped all the sections of the society owing to the reason of changed lifestyles of people in cities as well as villages. Moreover, diabetes does not bring only the physical weakness but mental fatigue too, because a person down with diabetes has to live a life surrounded with high precautions and selective eating which again brings a lot of strain on the patient in maintaining the routine, failing which leads to 1.5 million deaths every year. Poorly managed diabetes acts as a host of long term complications as well like: heart attacks, Strokes, Blindness, Nerve damage, Amputation of Limb, Impotence in men and Pruritus (Itching). Therefore throughout activities we have been disseminating a detailed insight into the reasons of developing diabetes and how with small measures one can remain prevented or maintain the sugar levels within the body system.

A round table conference was held where more than 30 registered medical practitioners were called to discuss on the topic “Relevance of Ayurveda and Yoga in treating Diabetes” at Shiv palace, Vijay vihar. Ms. Neelam Singh - practioner, West Medical Association, New Delhi, Dr. Shailesh Sharma – child Specialist, Jaipur Golden Hospital along with DJJS Representative Sadhvi Anuradha Bharti Ji were the speakers who spoke on different aspects related to the diabetes. DJJS representative put forth the prospective significance of yoga asanas and pranayam saying “Ayurveda talks about 20 forms of Diabetes (Prameha) of which the fire element of the body), and 10 are caused by Kapha (imbalance of the water and earth element of the body) and diabetes is mainly kapha doshaja. Therefore, Yoga Asanas act as a catalyst in balancing the 5 elements of the body which eventually cures the body from innumerable diseases”.

An ‘Ayurvedic Health Camp’ was organized in Nurmahal for the duration of 4 hours to cater the patients suffering from diabetes within the nurmahal ashram and various villages connected to it. With the proficient team of 4 Ayurvedic doctors and 8 medical staff, the camp provided the basic medical facilities to more than 188 people who visited the camp. Well researched ayurvedic medicines, especially ‘Madhunil’ for diabetes mellitus of SAM Pharmacy, were provided to patients at concessional price. Although focus was on pulse diagnosis, camp organizers also made special arrangements for gluco- testing and blood pressure measurement. 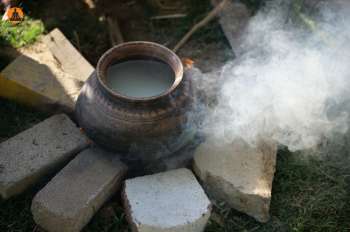 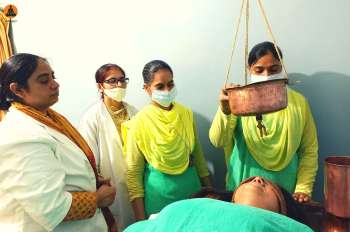 Panchkarma - A Panacea to myriads of Health Issues, is what Aarogya offers at its Delhi and Punjab Centers | August 2022