In Hinduism, the cow is revered as the source of food and symbol of life and may never be killed. However, many non-Hindus interpret these beliefs to mean that Hindus worship cows. This is not true. It is more accurate to say the cow is taboo in the Hindu religion, rather than sacred. This is just one example of the misunderstandings people have about the Hindu faith. So to end the misconception of people, Gau Katha was organized in Kaithal, Haryana from 1 April 2015 to 5 April 2015 by Divya Jyoti Jagrati Sansthan (DJJS). Sadhvi Viveka Bharti Ji was the orator of the Katha. Chander Bhan Mittal (Jila Mantry, Hindu Parishad), Satpal Gupta (Chairman Akhil Bhartiya Hindu Mahasabha) were the Chief Guests highlights of the evening who were mesmerized by the divine thoughts of the evening.

Sadhvi Viveka Bharti Ji explained that millions of Hindus revere and worship cows. Hinduism is a religion that raises the stature of Mother to the level of Goddess. Therefore, the cow is considered a sacred animal, as it provides us life sustaining milk. She also tackled various misconceptions and issues related to cows and cow slaughter. The only intention here was to preserve the most sacred living animal, cow.

In India, The cow is seen as a maternal figure, a care taker of her people. The cow is a symbol of the divine bounty of earth and hence must be protected and cared for. This message was loud and clear. Attendees of the program were surprised at the depth of the knowledge on subject matter and benefitted by the newly gained Knowledge.

It has been the endeavour of DJJS to protect and preserve all the living beings and make a world a better and peaceful place to stay in. This Katha was another critical step in that direction. 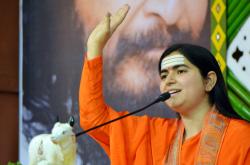