An exceptional program- Mata Ki Chowki was organized by Divya Jyoti Jagrati Sansthan (DJJS) at Hoshiarpur, Punjab on 20th November 2021. The event venerated Mother Goddess through the devotional songs sung by the disciples of His Holiness Ashutosh Maharaj Ji (founder and head of DJJS). Furthermore, the orator of the event Sadhvi Bhavarchna Bharti Ji, eloquently unveiled the true significance of the weapons held by Mother Goddess in her 10 hands. She elucidated that a trident in one hand of the Goddess and a lotus in another; carries a deep significant meaning. Trident symbolizes the firmness and decisiveness necessary for certain situations of life. Whereas, lotus indicates the calmness and placidness, that is important in dealing with oneself and others.  Hence, it metaphorically represents the balance humans should have in their life.

Unfortunately, such a balance is lacking in our society these days. One such striking example is the imbalance between the genders. It is quite conspicuous by the gender gap statistics that the society adores the strength of a man but shuns the gentleness of a woman. Definitely, such a society needs a reformation. But, of what kind? Sadhvi ji explained that Divine knowledge (Brahm Gyan) bestowed by the grace of a true spiritual teacher - Guru transforms the person to the core giving a better understanding and sensitivity towards the societal issues. And this inner transformation then eventually leads to the outer reformation. On this very principle, DJJS is running its social initiative Santulan (Gender Equality Program). This initiative works for the elimination of all forms of discrimination and violence providing a holistic empowerment to women. The core formula behind this reformation is to make everyone realize the import of Universal brotherhood. When the oneness of all human beings is realized at the soul level through Brahm Gyan, then arises the conscience to treat each and all with respect and dignity. Then the transformation does not have to be imposed but it inevitably comes from within. Hence, DJJS gives an open invitation to all and one to come forward and seek this Brahm Gyan’s meditation formula. So that, the society can be uplifted and transformed and we can have a better place to live in!

The august gathering and dignitaries, such as Shri Vijay Sampla Ji (the Chairman of the National Commission for Scheduled Castes and the former Minister of State for Social Justice and Empowerment in India), applauded the efforts of DJJS. The program was concluded with the distribution of ‘prasadam’. 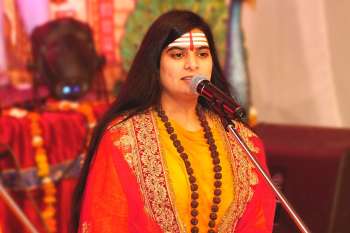