Recalling the sacrifices of Women Freedom Revolutionaries with Santulan; This Independence Day, Pledge to hold the flag of Emancipation of Women and Lead
All Categories

Recalling the sacrifices of Women Freedom Revolutionaries with Santulan; This Independence Day, Pledge to hold the flag of Emancipation of Women and Lead

Brimmed with patriotism, the nation is all geared up to commemorate 71st Independence Day and dedicate one day to the great martyred souls. Not to forget, the count includes numerous heroic women like Rani Laxmi Bai, Madam Bhikaji Cama, Sarojini Naidu, Savitribai Phule, Kamla Devi Chattopadhyay and many more, who took active stance against the British Empire and ensured they are heard; which lead to ‘History’ being called as ‘HerStory’ by many. Recognizing their contribution to empower women of today, Santulan, under the stewardship of His Holiness Ashutosh Maharaj Ji, Founder and Head of Divya Jyoti Jagrati Sansthan, is conducting an awareness drive in the month of August across India to commemorate Independence Day under the theme “Let’s recall their sacrifices”. The vision is to develop voice among women in order to enable them to withstand violence and gender based prejudices and rise up as gender revolutionaries. 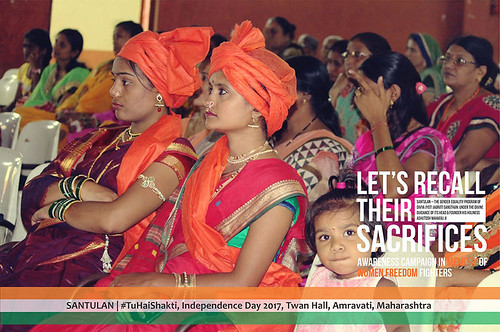 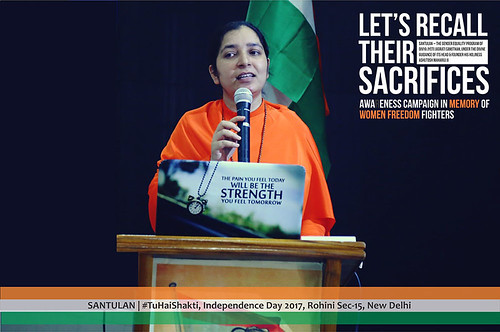 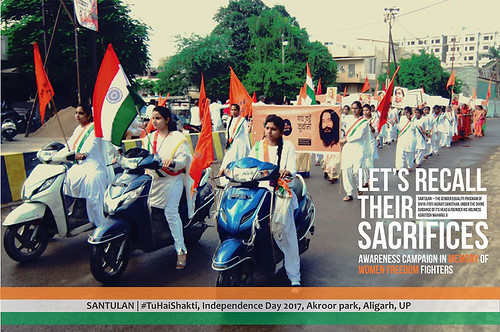 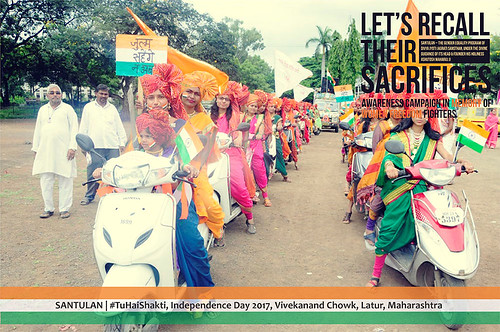 Awareness walks are being conducted massively nationwide, particularly by women, as the premier initiative to raise awareness for women power. Holding posters and placards with slogans to encourage women to break silence and voice against violence, putting face masks of female freedom fighters, women are stepping through every possible street spreading message to combat gender imbalance. The motivational music of ‘Tu Hai Shakti’ being played in background ignites the spirit of empowerment in every woman.

Sensitization workshops are also being carried out actively with diverse awareness creating ingredients. Some of them are, a dance ballet narrating power packed tales of Jhansi, an inspiring skit showcasing freedom struggle of Madam Bhikaji Cama, interesting games making attendees to introspect their individual traits and personalities comparing to the revolutionaries, pledge wall to receive commitments of attendees to be part of sensitization drive and holistic empowerment of women, enlightening lecture by Sadhvi disciples to edify women suffering from rights violation and deprivation. Shackles could be different, be it social, economic, political or emotional, but every woman is bound.  The objective behind observing and recalling nation’s independence specifically with women is to release them from these invisible shackles and motivate them to be a pioneer to break stereotypes of women and fight against gender discrimination. The spirit inculcated by every volunteer wails aloud ‘Head up, voice and break silence!’.