Shri Ram the seventh incarnation of Lord Vishnu took his avatar in the Bronze Age i.e Treta Yug to annihilate the demon king Ravana. He is avowed for his immaculate temperament and his unrivaled modesty. Conducive to the above mentioned traits of Shri Ram, DJJS founded and headed by the revered master HIS holiness Shri Ashutosh Ji Maharaj, organized a 10 days spiritual program ‘Shri Ram Katha’ from Oct. 12 to Oct. 21 at Jalandhar, Punjab. The Katha orator Sadhvi Shreya Bharti Ji divinely displayed the magnificence and the deeds of Shri Rama. She revealed that Shri Rama was effulgent like the sun, his virtue of forgiveness like the earth, intelligence like no one else. HE was a brilliant warrior and a great strategist. HIS deeds as a son, as a brother, as a husband and as a king portray his modesty and humbleness for which he is popularized as Maryada Purushotam. HE is worldwide known to break the social taboos by sharing the meals with poor Shabri thus routing the mankind towards equality and brotherhood. HIS reign –“Ram Rajya” is idealized for peaceful, harmonious and secure state that is the major ideal that every government should strive for.

Further the orator invited the devotees to contemplate as to why are we humans incapable of inculcating the attributes of Shri Ram. She further described that so far we have been living in darkness as our hearts are full of thoughts like jealousy, lust, violence, arrogance etc. These negativities can only be overpowered by the one and only technique-Brahm Gyan that was the sole reason behind the qualities of Shri Rama. Its only the Brahm Gyan that helps one to achieve self realization and connected with the powerhouse of divinity. She humbly requested all to initiate themselves with divine light within to witness the divine character of Shri Rama which is what everyone should aspire for to gain peace and prosperity. 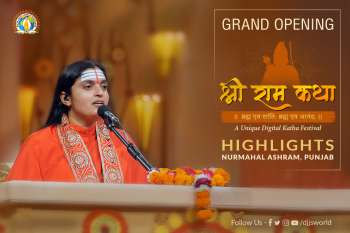