Today, peace has predominantly become political word towards settlement of issues between the nations through military involvement, cessation of arms and weapons and dialogue on less-violent, civilian matters. The countries are constantly living under war pressure. This has created a situation of stress in the world. When we rise in the morning and listen to the radio or read the newspaper, we are confronted with the same sad news: violence, crime, wars, and disasters. Even in these modern times, it is clear that one's precious life is not safe. Our devotion to the world is squeezing out our energy, leaving us frail and weak while our devotion to God revitalizes us while refilling us with new vigour, energy and peace. To inculcate this vigour and peace, Divya Jyoti Jagrati Sansthan (“DJJS”) organized seven days Shrimad Bhagwat Katha at Gorakhpur, Uttar Pradesh from 8th to 14th December, 2019. The Katha was dedicated to Bodh initiative (Drug Abuse Eradication Program) of the Sansthan. The captivating discourse was accompanied by prayerful and soulful bhajans. The listeners could be seen totally absorbed. The Katha was D-Live telecasted on Sanskaar Channel and was also covered by various newspapers like Hindustan Times, Dainik Jagran, Amar Ujala, etc. 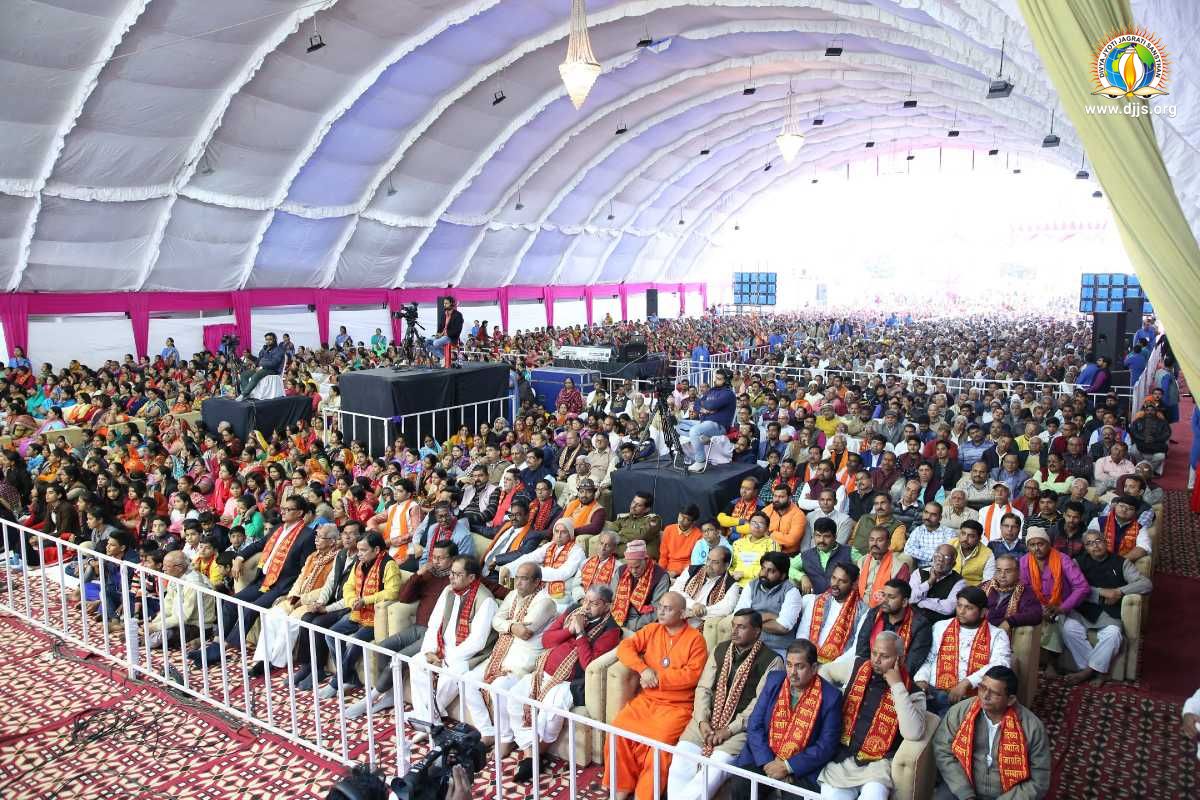 The Katha orator, Sadhvi Aastha Bharti Ji, Disciple of Shri Ashutosh Maharaj Ji flawlessly narrated Katha with innumerable hymns. The remembrance of Lord Krishna’s lotus feet destroys the inauspicious events from the life of the devotees and brings greatest fortune. His story is a source of joy, peace and inspiration for people from all walks of life. Lord Sri Krishna shows all His devotees how to balance materialism and spirituality. He ruled the country, advised as minister and gave the highest form knowledge to Arjuna and Uddhava. In a very clear and wonderful way, the Supreme Lord Krishna describes the science of self-realization and the exact process by which a human being can establish their eternal relationship with God.

Through various stories from Shrimad Bhagwat Puran, the katha orator explained the connection between GOD and Man. She gave many examples from the scriptures in support of the said statement clarifying that how bhakti brings positive changes and peace in a person’s life. The capability of human beings to perceive things and use their approach is limited. So the need is felt for someone who could provide an incessant support and handle the turbulence and tribulation of life in his own manner.

All holy scriptures, brought down to man from divine inspiration, have confessed that the human form is the form most adored by God. God is within us, but, because we are not aware of this, we employ all our time in trivial issues of the world, which will not last. Know the eternal science of Brahm Gyan and realize the magnificent universe that resides within the finite human garbs. On becoming the first-hand beholders of the infinite Lord inside, the being accepts the truth and authenticity in the proclamation of great sages. You will become the perfect embodiments of peace and bliss only when you experience it yourself.

Large number of devotees gathered to attend this spiritual discourse. Several dignitaries marked their presence at this event and the program was concluded gloriously with ‘Katha Gyan Yagya’ and many people were initiated into Brahm Gyan, thereby joined the bandwagon of ‘World Peace’.