This navratri, pledge to fast from female feticide for lifetime

Celebrated twice a year, Navratri-the nine days sacred festival is a reminder of women power, victory of good over evil and girl child worship. Woefully, it is remembered only for 9 days and forgotten as society continues to kill female foetuses. Divya Jyoti Jagrati Sansthan (DJJS) under its Gender Equality program-Santulan, every year, denounces this paradox in the form of a mass awareness drive under the name “Kanya pujan ke desh mein kanya bhrun hatya kyun” during 9 days of Navratri and endeavours to reconstruct the corrupt mindsets that bow down to female deity but give no second thought before killing a female fetus. Persistent to this established trend, Santulan teams carried out mass awareness walks & jhankis, information counters and workshops all over from September 21 to September 29, 2017. 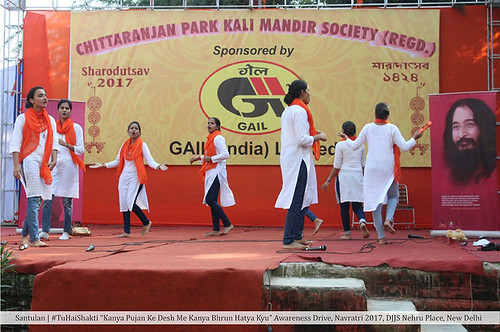 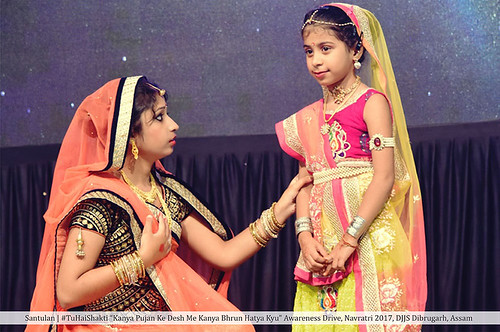 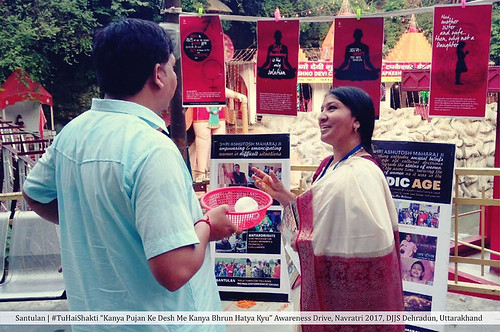 Spell binding traditional dance performances were presented by santulan volunteers, expressing the delight of Navratri, followed by an awakening skit displaying social violence in the forms of female feticide, gender discrimination as a result of age-old prejudices & stereotypes, molestation etc. in the land where festival like Navratri is celebrated to worship girl child and honor women as incarnations of god. The presentations were summarised by Santulan volunteers highlighting the role and importance of women. Emphasis was given on the otherwise ignored fact that a daughter possesses the ability to flourish 2 families whereas a son does for only 1 and thus, should be welcomed gracefully. Erasing the source of joy, sensitivity and affection, will contribute to make a bland and aloof society that is indifferent to inhumanity and pushes the world to darkness. The activities were concluded with a group photograph wherein participants were holding placards of slogans to save girl child.

Information counters were also arranged with sensitizing display of Santulan’s initiatives in regards to women empowerment and status upliftment. Mass distribution of organization’s informative material was also done to spread the word of awareness to maximum. Further, counselling by volunteers to visitors was also conducted to inculcate the sense of respecting women in real sense and put a full stop to hypocrisy of worshipping girl child only for 9 days during Navratri. The intention is being shared with public at large to bring about concrete change in gender perspective and eliminate all forms of violence against women.