With the advent of various technological advancements, humans have lost connection with nature, resulting in great environmental imbalance. The World Environment Day is celebrated every year to remind people about their duties towards the nature and to make them introspect their conduct and head towards nature conservation. This year’s theme for the day was “Connecting People to Nature”. 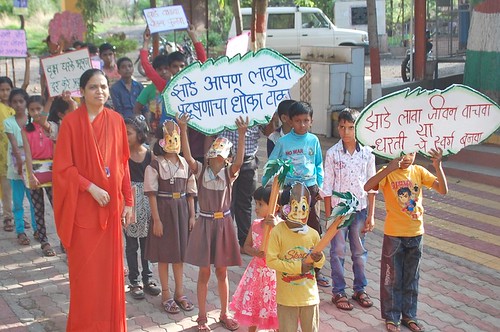 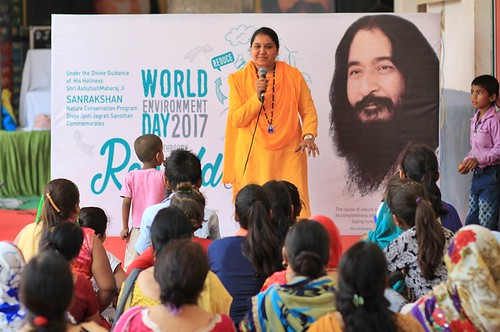 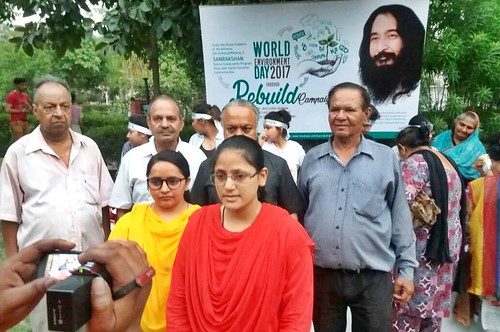 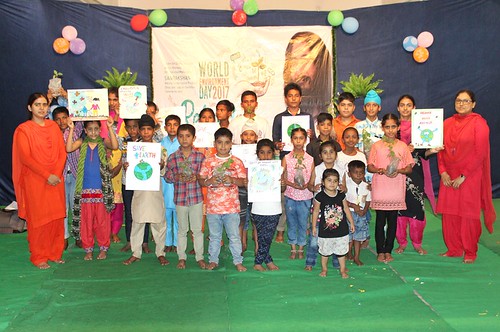 His Holiness Shri Ashutosh Maharaj Ji says, “the cause of nature conservation will find its completeness only in the conservation of the fading Human- nature Relationship” Based in this principle Sanrakshan has been devoted to rebuilding human- nature relationship. Furthering the same on the occasion of World Environment Day 2017 Sanrakshan undertook rigorous sensitization and engagement activities across the country under its annual Rebuild Campaign.

The sensitization campaign, this year focused on three modes namely Rebuild Workshop, Rebuild Nature Walk and Rebuild sustainable living booth for connecting people to with nature and enabling them to cherish this vital relationship. The Nature Walk was an innovative new addition to the set of programs organized under the Rebuild campaign, where the volunteers took the children and youth to a nearby park and acquainted them with the beauty of nature through various activities such as watering plants, drawing session and nature quiz.

In addition, spiritual platforms of DJJS were also became platforms of spreading environmental awareness with ascetic disciples of H.H. Shri Ashutosh Maharaj ji, delivering lectures on the topic ‘human- nature relationship’. They talked about the growing ecological footprint of man, and urged & advised people to adopt sustainable lifestyles, by implementing the 3Rs in their life. Some branches disseminated the same message through Nukkad natak.

Details of Activities undertaken by DJJS Branches across the country

The branch undertook a rally on June 3, 2017 in Dilshad Garden to sensitize people about the significance of natural resources and to make them conscious of the level of dependency humans have on them. The volunteers raised slogans calling attention of masses towards the deteriorating condition of the environment and urged them to protect these limited resources. They also presented an enlightening skit on climate change, on a busy road of the area and encouraged everyone to render their support in favor of a green and sustainable environment. During the rally Pocket A, E, I and Sai Chowk of the area were covered.

Besides this, the Karkardooma branch also conducted a workshop for children at Ayushyam center (near Karkardooma ashram) on June 1, 2017, with a view of inculcating pro-environmental values in them at an early age. In the beginning, the children spent some time in meditating for Mother Earth. Thereafter, various fun-filled and informative activities were organized to aware children about climate change and its impact on every small thing of our life in a simplified way, including sensitization through presentations and videos. Throughout the workshop, volunteers ensured that maximum participation is achieved. Sadhvi Chaitanya Bharti ji, ascetic disciple of H.H. Shri Ashutosh Maharaj ji, concluded the workshop with her lecture explaining children that nature is the basis of our survival, without which existence of humans is not possible on the planet. She encouraged the children to practice 3Rs (Reduce, Recycle, Reuse) and stay committed to their stand on the issue.

On the occasion of World Environment Day, DJJS Dwarka undertook Nukkad natak at two places of the area, including Mahavir Buddha Jayanti, DDA Park, Near Subzi Mandi, Nasirpur and Dwarka society area on 24th and 25th June respectively, to awareness masses about the role nature plays in ensuring human survival. The volunteers called attention of masses by singing a song. Then, they presented Nukkad natak when the people started gathering. Through their act, they sensitized people about the importance of nature and urged them to protect it. They also talked about the ancient concepts on nature conservation stated in Shrimad Bhagwat Mahapuran to show everyone the ideal way of living, which is in line with nature.

DJJS organized a program at Shri Ram Saraswati Shishu Mandir School, Delhi Road, Meerut on June 1, 2017 with an intent to reconnect the children with the nature. The event initiated with a brief introduction of DJJS and its Nature Conservation initiative “Sanrakshan” by Sadhvi Neelam Bharti ji. Thereafter, the sansthan's volunteers performed a small skit on how to reuse waste materials that in all ways proves as an economic technique, offering saving in resources, time as well as money. Post that, a perfect live example of reuse was given by a volunteer, who taught everyone the procedure to make a showpiece out of old and useless plastic bottles. Then, all the students and teachers offered prayers to God for the environmental stability and peace on Earth. In the end, volunteers distributed saplings to everyone as a symbol of green and clean Earth.

DJJS Ghaziabad organized a workshop for girls and women on June 10, 2017 in Ashram premises to develop sensitivity among them towards the nature. The workshop started with an introduction by Sadhvi preachers about the deteriorating environmental condition, which was followed by an enlightening skit and dance ballet by the young girls. There were bhajans as well awaking everyone present there to stand up and contribute their bit to protect the planet. Besides this, some activities were also conducted to sensitize people of their relationship with nature, and inform them about the consequences if this relation is not regarded. The sansthan had also setup a desk to personally encourage people for sustainable lifestyles and stand for climate change.

This year, DJJS Ludhiana undertook various programs under the Rebuild campaign. The branch organized a nature walk with the kids of nearby areas on 6th June. The volunteers took the children to Rose Garden and asked them about names and uses of various plants. They also told them about various medicinal plants in the garden and their uses. Post that, a drawing competition was organized, where kids made drawings on nature conservation using the fallen leaves in the park.

Besides this, DJJS Ludhiana set up sustainable living booth at various places of the city, including Sector-32, Gobind Gaudham and Pavilion mall. People visiting the booths were sensitized on the impact of climate change on various industries, and on the planet as a whole, and were encouraged to reduce their ecological footprint by adopting 3Rs. Moreover, some articles made of old t-shirts and waste material were kept at the counters to explain people how and for what purpose the old articles can be used.

The branch also delivered sensitization lectures in various schools of the city, such as Adarsh School (Ambedkar Nagar), Indian Public school (Ambedkar Nagar) and SSB Memorial Day Boarding School (Tibba Road) to reconnect kids with nature. The disciple preachers of DJJS talked about the various problems environment is facing today, the biggest being climate change. They discussed how people in Vedic era would always stay aligned with nature and ensure that their conduct does not harm the environment, because they regarded their relationship with nature. Children were also encouraged to adopt the concept of 3Rs in their lives.

A Nukkad natak was also conducted by the branch in Moti Nagar, Ludhiana to explain masses about the irreparable damage humans have caused to the planet and to encourage them to stand up for the issue and correct the wrong done.

DJJS Kapurthala branch observed World Environment Day by creating mass sensitization through spiritual platform. The program was organized on 5th June at Sultanpur Road, Sheikhupur. In her lecture, Sadhvi Sukhbir Bharti Ji, ascetic disciple of His Holiness Shri Ashutosh Maharaj Ji, explained how the environment is on the way to becoming a gas chamber, considering the continuous increase in pollution. She talked about the Vedic era, where the environment used to be so clean and green, because people regarded their relationship with nature. In present times, especially, in the last two decades, deforestation, pollution and lax human attitude have resulted in desertification, climate change and ozone layer depletion, the root cause being the fading human-nature relationship. She apprised people of how nature and its resources make the survival of humans possible on the planet, and in their absence, humans race too will wipe off from the planet. The attendees marked their support for a green environment by taking a pledge in the end.

DJJS Jalandhar branch sensitized masses by setting up the Rebuild Sustainable Living Booth at Pratap Bagh. The volunteers had displayed various articles that were made using the old t-shirts, cups, bulbs, papers, etc. on the booth setup by the sansthan. The visitors were explained about the importance of 3Rs (Reduce, Reuse and Recycle) and were encouraged for practicing it in their routine lives. The volunteers explained the people that we must adopt sustainable lifestyle, which is centered on conservation. This can help in reducing one's ecological footprint also. Visitors were impressed by the work DJJS has been doing over the years in this field and also, by the commitment of young volunteers towards the nature. Sh. Praveen Talwar Ji (Pratap Bagh Society President), Sh. Sanjeev Sharma (Advocate) and Sh. Rajinder Gupta  (Businessman) were few eminent people who graced the occasion with their presence.

The branch undertook a mass sensitization program at Ambedkar Nagar, Police Line Road on 4th June. Sadhvi Mahayoga Bharti ji, ascetic disciple of H.H. Shri Ashutosh Maharaj ji, delivered a lecture stating the current environmental crises and the root cause behind it. She explained them about the inter-relationship between humans and nature, which has faded away over the years, resulting in continuous deforestation and exploitation of natural resources. The branch volunteers also presented an enlightening skit encouraging people about the importance of tree plantation. This was followed by a dance ballet by the volunteers motivating everyone to stand and make Earth a green planet again. Sh. Sarwan Muchh ji (President, City Congress), Sh. Naresh Mahajan (President, Municipal Corporation), Sh. Shashi Kapoor Ji (Vice President, Shiromani Akali Dal Badal) and Sh. J.N.Sharma Ji (President, Akhil Bharti Vikas Prishad) were some eminent people who graced the occasion with their presence. In the end, people marked their support by taking a pledge.

DJJS Dhilwan organized a program at Jamna Devi Mandir, Rayya on 15th June to create awareness among children about the age-old relationship of humans and nature. The program started with a lecture by Sadhvi preacher of the sansthan. Sadhvi ji explained children that nature is the basis of human survival. However, over the years, especially in the last two decades, nature has faced unprecedented exploitation by humans, putting it into an irreparable state. She motivated the children to plant trees in order to deal with the environmental crises. Post that, a drawing competition was organized, where children put in their all emotions for nature in their drawings. The winners were given prizes as well. In the end, Sadhvi Kamleshwari Bharti ji, Sadhvi Harinder Bharti ji and Sadhvi Shankarpreeta Bharti ji distributed saplings to the children and advised them to water them daily to be able to reap the desired benefits out of them.